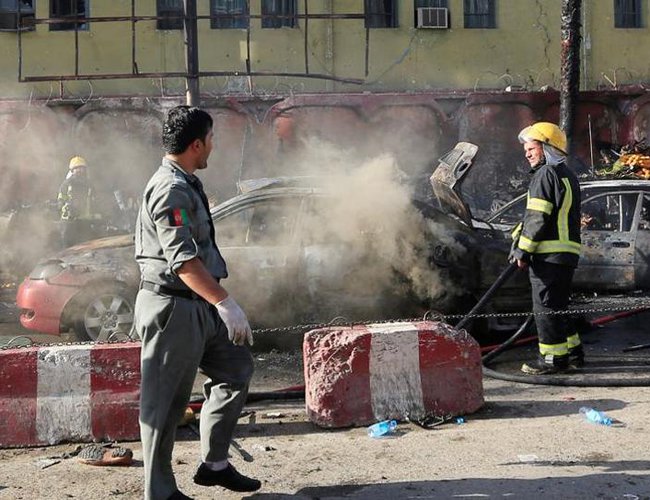 A Taliban spokesperson claimed the target was an ISIS-K suicide bomber who was planning to carry out an attack at the Kabul airport, reports say.

The United States carried out a military strike on Sunday in Kabul, two US officials told Reuters. A US military spokesman confirmed that the strike was carried out against a vehicle in Kabul, with the AP noting that the vehicle contained "multiple" suicide bombers.

The official, speaking on condition of anonymity, said the strike targeted suspected ISIS-K militants. They said they were citing initial information and cautioned it could change.

A Taliban spokesperson claimed the target was an ISIS-K suicide bomber who was planning to carry out an attack at the Kabul airport, reports say.

On Saturday, US President Joe Biden promised further strikes against the Islamic State in Afghanistan in retaliation for a deadly bombing outside Kabul airport. "This strike was not the last. We will continue to hunt down any person involved."

This news comes as another massive explosion was heard in Afghanistan's Kabul on Sunday afternoon, a few days after a double suicide bombing attack killed dozens near the city's airport.

Eyewitnesses in Kabul say the explosion was a rocket hit at a house in a residential region close to the airport, but these reports are still unconfirmed. Television footage from the scene showed black smoke billowing into the sky above buildings.

Thus far there have been no official reports of casualties or injuries.

Late Saturday night, the US State Department Bureau of Consular Affairs issued an immediate warning for US citizens to evacuate areas near the Kabul airport due to a "specific, credible threat."

US forces were in the final phase of pulling out of Kabul on Sunday, ending two decades of costly involvement in Afghanistan, as the country's new Taliban rulers prepared to take control of the airport.

Just over 1,000 civilians remained at the airport on Sunday to be flown out before the troops finally leave, a Western security official told Reuters.

Ukraine welcomes US Offer Of Long-Range Rockets By Agencies 4 hours, 40 minutes ago

US Shoots Down China's Balloon, Says Defense Department By Agencies 4 hours, 55 minutes ago