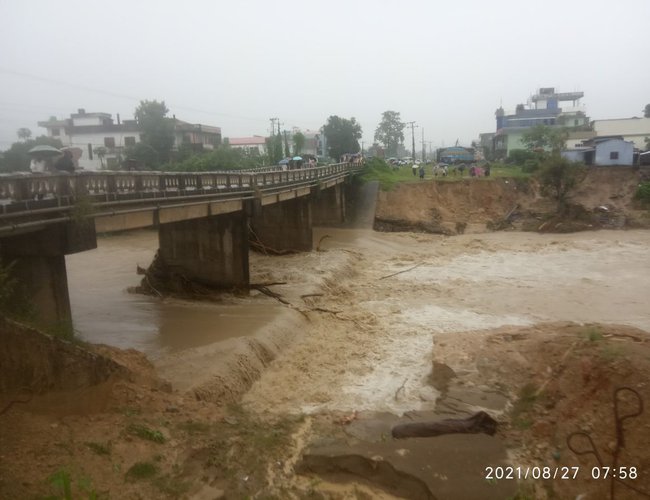 Triggered by incessant monsoon rains, Floods and landslides claim nine lives in western including Pokhara, Dang and Tanahun districts. Due to rain six others sustained injuries and one has gone missing.

According to Disaster Risk Reduction Management Authority (NDRRMA), five were killed in a Wednesday night landslide at Bhalam, in Pokhara Metropolitan City (PMC)-20 and two at Mulabari, Pokhara-11, in Kaski district.
Two more died and one went missing in the landslide at Ryalechaur, in PMC-20. The Mulabari deceased were identified as Bishnu Saki, 29, and his son Sujan Saki, 8.

Those killed in Ryalechaur were identified as Krishna Kumar Shrestha, 45, and his wife Sanumaya Tamang Shrestha, 35. According to the Police, Krishna Kumar died while undergoing treatment at Manipal Teaching Hospital while his wife died on the spot.


Likewise, at least four persons were killed after a flash flood swept away a car in Ghorahi, Dang. The swollen Sisne Stream in Ghorahi-Lamahi road section of Gorahi Sub-Metropolitan City-4 had swept away a car (Province 03-01-024 Cha 4440) on Wednesday night.

48 Killed, 31 Missing And Hundred Displaced By The Recent Floods By NEW SPOTLIGHT ONLINE 6 months, 3 weeks ago