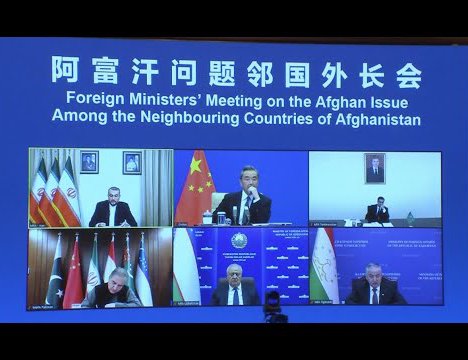 The Chinese foreign minister has urged Afghanistan's Taliban rulers to keep their promises in order to gain international recognition.

Wang Yi made the comment at the first virtual meeting of foreign ministers from Afghanistan's neighboring countries since the Taliban takeover.
Referring to the announcement of a Taliban government, Wang said broad inclusiveness and a resolute crackdown on terrorism are the most important points.

Wang said, "We should guide and urge the Afghan Taliban to unite with all ethnic groups and factions, build a broad and inclusive political structure, pursue moderate and prudent domestic and foreign policies, draw a clear line against terrorist forces, and establish and develop friendly relations with other nations, especially neighboring countries."

Wang announced that Beijing has decided to provide Afghanistan with nearly 31 million dollars' worth of supplies including food as well as 3 million doses of coronavirus vaccine.

The meeting was chaired by Pakistan, and apart from China, was attended by four other countries: Iran, Tajikistan, Turkmenistan and Uzbekistan.