Discussion At Political Level Continues To Push Ahead With MCC: PM Deuba

PM Deuba Discuses On MCC Grant Program And Its Implementation 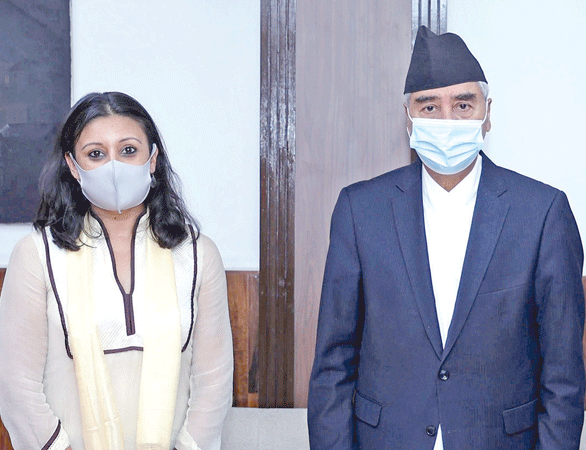 Prime Minister Sher Bahadur Deuba told Vice President of Compact Operations of the Millennium Challenge Corporation (MCC) Fatema Z. Sumar that he was continuing discussions at the political level to push ahead with the MCC Compact program.

In a meeting with a delegation of the MCC led by Sumar this evening, Prime Minister Deuba discussed about the MCC grant program to Nepal for the development of electricity transmission line and road maintenance project reports The Rising Nepal.

They also discussed the possible cooperation from the MCC in Nepal’s economic development. Sumar expressed her belief that the MCC compact would be ratified by the parliament at the earliest.

Earlier on Friday, Sumar paid a call to Chairman of CPN (MC) Pushpa Kamal Dahal Prachanda at the latter’s residence in Khumaltar. During the meeting, Prachanda said that his party was clear on moving ahead with the MMC Compact Program with consensus among all political parties in Nepal.

As informed by Prachanda’s Press Coordinator Bishnu Sapkota (Jugal), the meeting lasted for about an hour and various aspects of MCC Compact and Nepal-United States bilateral relations were discussed.

Malaysian Home Minister In Nepal By Agencies 2 days, 6 hours ago