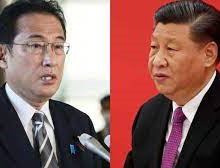 The two leaders spoke over the phone for about 30 minutes on Friday. It was their first conversation since Kishida took office.

The Japanese leader conveyed his willingness for dialogue about a range of issues between the two countries.

After the talks, Kishida told reporters that the pair discussed the situations in Hong Kong and the Xinjiang Uygur Autonomous Region.

Kishida also said he raised the issue of the Senkaku Islands in the East China Sea. Japan controls the islands. The Japanese government maintains they are an inherent part of Japan's territory. China and Taiwan claim them.

Kishida said they didn't discuss China's bid to join the major trade pact known as the Comprehensive and Progressive Agreement for Trans-Pacific Partnership, nor a state visit by Xi to Japan. The Chinese leader had been scheduled to arrive in April 2020, but the plan was postponed due to the coronavirus.

China's Foreign Ministry says Xi told Kishida that his country wants to boost dialogue and cooperation in line with the requirements of the new era.

Xi was also quoted as saying the two countries should properly handle sensitive issues, such as historical events and Taiwan.

Next year, Japan and China mark 50 years since the normalization of bilateral ties.