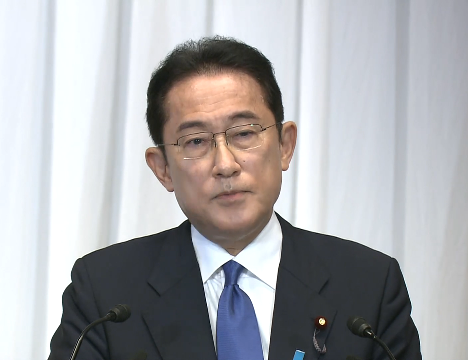 The Lower House of Japan's Diet has been dissolved for a general election.

Japanese political leaders are gearing up for a general election at the end of the month as Prime Minister Kishida Fumio dissolved the Diet's Lower House on Thursday.

At a news conference on Thursday evening, Kishida said, "We must do all we can to fight the coronavirus and get the economy back on track. We also have to build a new social economic system for the post-corona era. I would like the people to decide who can carve out a future after the pandemic."

Kishida revealed his plan to present to the public the framework of his government's anti-coronavirus measures on Friday. It will include plans to secure more hospital beds, administer booster vaccine shots, and make oral antiviral medication available.

Kishida said that he will hammer out a comprehensive and bold economic package immediately after the election. He proposed creating a new form of capitalism in which the middle class will gain a greater share of the benefits of growth.

Kishida stated his government will not leave everything to the market in terms of distribution and said, "We will increase people's wealth by letting both the private sector and the public sector play their own roles. We will not only increase employment, but also raise the income of each and every worker."

Kishida also stressed his commitment to bolstering the country's defense. He said the ministers are preparing to revise the national security strategy and related defense programs.

Kishida became the leader of the main ruling party last month, and was elected Prime Minister by the Diet last week.

The time between the new prime minister taking office and the dissolution of the Lower House was the shortest in postwar Japan.

The Lower House speaker made the announcement on Thursday afternoon that triggers a national election. The Cabinet will meet later in the day to formally set the election date, which is expected for October 31. Campaigning will officially kick off next Tuesday, October 19.

It will be the first Lower House election in four years.
The top issues are likely to be the response to the coronavirus pandemic and how to rebuild the economy.

Prime Minister Kishida Fumio was confirmed as Japan's leader on October 4. It will mark the shortest period between a prime minister taking office and the dissolution of the Lower House in postwar Japan.
And the election will be an unusually brief battle. The period from dissolution to voting day will also be the shortest in the postwar era.