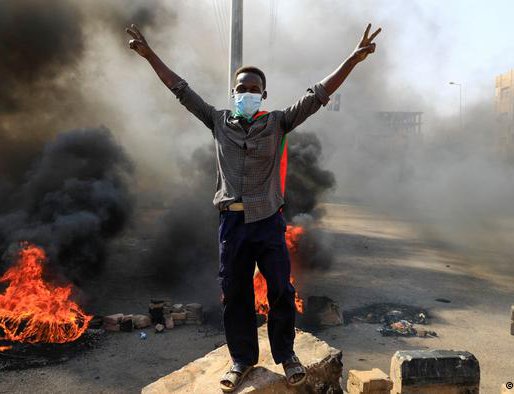 Military forces have arrested most cabinet ministers and pro-government party leaders. Prime Minister Abdalla Hamdok has been taken to an undisclosed location and has called on citizens to resist the coup.

Sudan's top general declared a state of emergency in the country on Monday and dissolved the government and ruling Sovereign Council, with ousted Sudanese officials calling the move a military coup.

Most of Sudan's cabinet ministers and pro-government party leaders have been arrested. The Sudan Doctors Committee, a civil society group, reports two deaths and 80 injuries after security forces fired into protesting crowds.

The arrests come amid rising unrest between the civilian and military leaders of Sudan, who were meant to share power after former leader Omar al-Bashir was toppled. Since then, the country has been ruled by a transitional civilian-military administration, until a civilian government could be elected.

PM Hamdok has taken to an undisclosed location

Armed forces took Prime Minister Abdalla Hamdok to an undisclosed location, after initial reports of him being put under house arrest. "After he refused to be a part of the coup, a force from the army detained Prime Minister Abdalla Hamdok and took him to an unidentified location," the Sudanese information ministry said. The ministry added Hamdok was calling upon the Sudanese people to resist the coup and "defend their revolution."

The statement also said that soldiers had stormed into the state broadcaster's TV and radio headquarters in the city of Omdurman, and detained some staff.

Demonstrations against the coup were already taking place in Khartoum and Omdurman.

Footage from the Qatar-based Al-Jazeera Mubasher TV channel showed protesters crossing barricades and entering the street surrounding military areas, with security standing by. An unconfirmed video on social media showed shots had been fired, with at least one person severely injured.