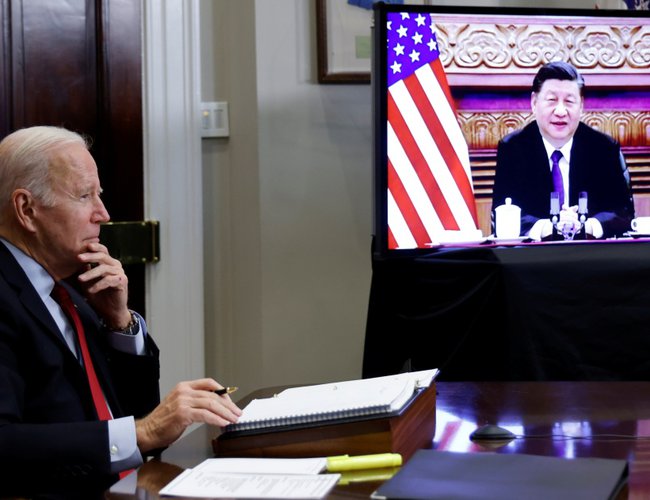 The leaders of the United States and China have wrapped up their first online summit without making major progress on matters where they are far apart, including Taiwan and human rights. But they agreed to continue dialogue to prevent conflict between their countries from ratcheting up.

US President Joe Biden and Chinese President Xi Jinping spoke for about three and a half hours on Tuesday morning, China Time.

The White House said in a statement that the two leaders discussed "the complex nature of relations between our two countries and the importance of managing competition responsibly."

The statement says, "President Biden welcomed the opportunity to speak candidly and straightforwardly to President Xi about our intentions and priorities across a range of issues."

It also says Biden "noted the need for common-sense guardrails to ensure that competition does not veer into conflict and to keep lines of communication open."

China's Foreign Ministry says President Xi pointed out the importance of positively managing differences of opinion and sensitive issues to prevent them from becoming uncontrollable.

The ministry says Xi called on the US to deal with bilateral issues carefully, as China has to protect its sovereignty, national security and profits arising from its own progress.

With regard to Taiwan, the White House statement says President Biden "underscored that the United States strongly opposes unilateral efforts to change the status quo or undermine peace and stability across the Taiwan Strait."

The Chinese Foreign Ministry says Xi noted "the new wave of tensions across the Taiwan Strait."
It says he called "achieving China's complete reunification an aspiration shared by all sons and daughters of the Chinese nation."

And Xi reportedly said that China "will be compelled to take resolute measures should the separatist forces for 'Taiwan independence' provoke us...or even cross the red line."

After the meeting, a senior US official noted that the summit had brought no major progress but stressed that this had not been expected.