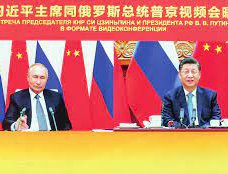 Russian President Vladimir Putin has expressed his intention to attend the opening ceremony of the Beijing Winter Olympic Games.

At the start of the talks, Putin said he looks forward to attending the opening ceremony of the Beijing Games in February.

He added Russia and China "invariably support each other on issues of international sports cooperation, including rejection of any attempts to politicize sports and the Olympic movement."

The development comes as the United States has announced it will not send government officials to the Beijing Games. Britain is among other nations who have announced a diplomatic boycott.

Xi made an apparent reference to the administration of US President Joe Biden, which views China and Russia as autocracies.

He said that "certain international forces under the guise of 'democracy' and 'human rights' are interfering in the internal affairs of China and Russia, and brutally trampling on international law and recognized norms of international relations."

He added China and Russia "should increase their joint efforts to more effectively safeguard the security interests of both parties."