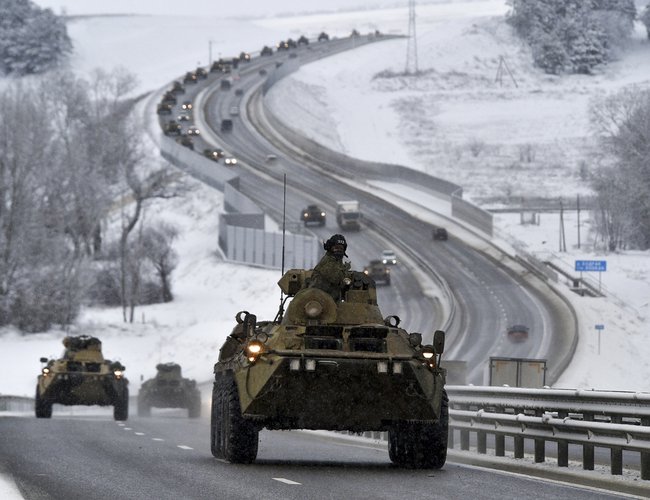 About 100,000 Russian troops have massed near Russia's border with Ukraine. The US and its allies are demanding their withdrawal.

The United States is seeking a solution through dialogue with Russia. But it has placed 8,500 troops on alert for possible deployment to Europe if needed.

US Defense Department Press Secretary John Kirby said, "Even as we continue to prioritize diplomacy and dialogue, we must also increase readiness. The United States will act firmly in defense its national interests in response to actions by Russia that harm us, our allies or partners."

US Secretary of State Antony Blinken and Russian Foreign Minister Sergey Lavrov met in Geneva on Friday. They failed to achieve a breakthrough, but agreed to continue their dialogue.

European Union foreign ministers discussed the situation. EU foreign policy chief Josep Borrell said, "We're doing our best in order for diplomacy to work. But should diplomacy fail, we are very well advanced in the preparation of responses to a potential Russian aggression."

In a speech, Ukraine's President Volodymyr Zelenskyy urged his nation's people to remain calm. He said there's no reason to panic as his government is working for a peaceful settlement together with its partners.

The US has ordered the families of American diplomats to leave Ukraine. Britain is withdrawing some embassy staff, but EU officials have not followed suit for now.

Japan's Foreign Ministry is advising Japanese nationals to avoid travel to Ukraine and urging those in Ukraine to leave.

Ukraine welcomes US Offer Of Long-Range Rockets By Agencies 17 hours, 19 minutes ago

US Shoots Down China's Balloon, Says Defense Department By Agencies 17 hours, 34 minutes ago