US To Send 3,000 More Troops To Eastern Europe

US To Send 3,000 More Troops To Eastern Europe 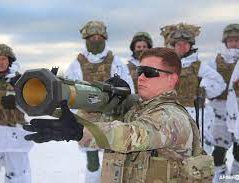 The United States has announced plans to send an extra 3,000 troops to Eastern Europe amid heightened military tension over the buildup of Russian troops along their country's border with Ukraine.

The Pentagon said on Wednesday that the troops will be deployed in a couple of days.

Some 1,700 of the troops in the US will be dispatched to Poland, which borders Ukraine.

Another 300 troops in the US will go to Germany, while 1,000 troops in Germany will be sent to Romania, also neighboring Ukraine.

He stressed that move is not permanent, and the troops will not fight in Ukraine.

Kirby said the deployments are in addition to the 8,500 service members in the US whom the defense secretary gave prepare-to-deploy orders last month.

He said US officials still do not believe Russian President Vladimir Putin has made a decision "to further invade Ukraine," but that he has the capability to do so.

He said, "These movements are unmistakable signals to the world that we stand ready to reassure our NATO allies to deter and defend against any aggression."