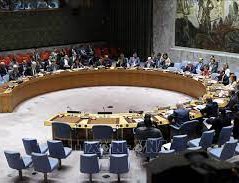 The US called for the meeting, which took place behind closed doors.

North Korea has conducted seven missile launches in the last month alone. Linda Thomas-Greenfield, the US Ambassador to UN, reiterated the call for Pyongyang to "cease its destabilizing actions and return to dialogue."

She says the failure of the Security Council to act emboldens North Korea to "further defy the international community."

On Sunday, Pyongyang launched a type of ballistic missile called the Hwasong-12. It has a range of about 5,000 kilometers, which is far enough to reach the US territory of Guam. This time, it was launched at a steep angle and fell into the Sea of Japan.

The last time North Korea launched a Hwasong-12 was in 2017, when the country also issued threats to target Guam.

The UN already prohibits Pyongyang from conducting ballistic missile and nuclear weapons tests. It has imposed a series of sanctions. US leaders say additional restrictions are needed, but Russia and China say sanctions should be eased.

President Biden In State of Union Exhorts Congress: ‘Finish The Job’ By Agencies 1 hour, 2 minutes ago