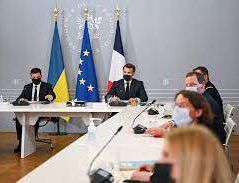 The presidents of France and Ukraine have agreed on the need to implement a ceasefire between Ukrainian forces and pro-Russian militants, as part of efforts to de-escalate tensions in the region.

Emmanuel Macron held talks with his counterpart Volodymyr Zelenskyy in Kyiv on Tuesday, after a meeting with Russian President Vladimir Putin in Moscow the previous day.

Sporadic fighting is taking place in eastern Ukraine although a ceasefire was agreed in 2014, fueling concern that it would escalate into a wider conflict.

Macron told reporters that both Putin and Zelenskyy are committed to implementing the agreement, adding that the shared determination is the only way to create peace.

Macron also said that a dialogue among senior government officials of Russia, Ukraine, Germany and France will be held in Berlin on Thursday.

Zelenskyy expressed hope that leaders of the four countries will hold talks on the issue.

But tensions remain, as the West shows no signs of accepting Russia's demand for guarantees that NATO will stop its eastward expansion.