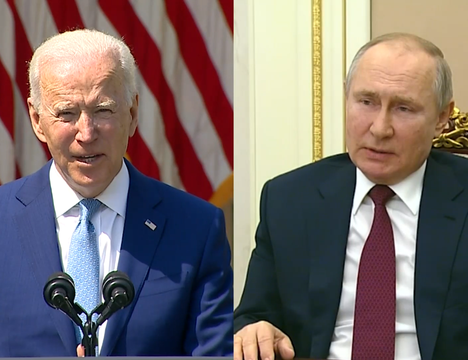 The leaders of the United States and Russia have held a telephone conversation as military tensions grow over Ukraine.

The talks between Joe Biden and Vladimir Putin lasted for about an hour on Saturday.

Biden has warned that if Russia undertakes a further invasion of Ukraine, the United States together with its allies and partners will respond decisively and impose swift and severe costs on Russia.

A senior official of the Biden administration said it remains unclear whether Moscow is interested in achieving its objectives through diplomatic or military means. The official said there is a clear possibility that Russia will decide to take military action.

The two leaders have agreed to continue engagement of officials from both nations.

On the same day, French President Emmanuel Macron also held a telephone conversation with Putin on the Ukrainian issue.

Macron has conveyed Western nations' strong concern over a possible Russian invasion of Ukraine. Putin described that as "provocative speculations" by the West.

Macron and Putin have reaffirmed continued dialogue, such as talks between Russia and Ukraine mediated by France and Germany.