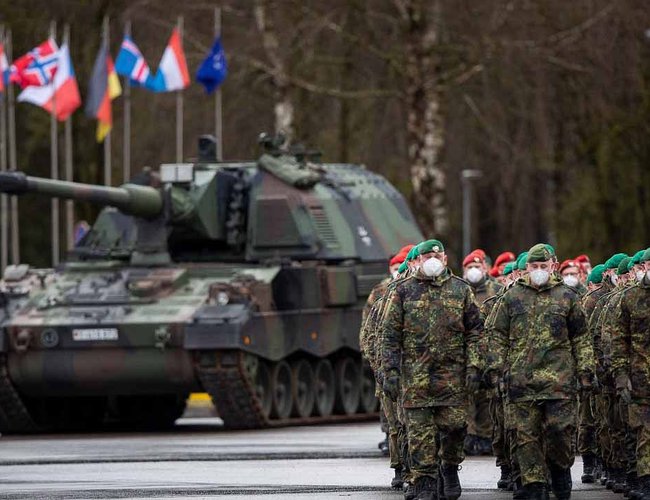 The ministry emphasized that no strikes are being carried out on the positions of the Ukrainian Armed Forces’ units that have laid down their arms reports Russian news agency TASS.

According to the news agency, Ukrainian troops are leaving their positions in large numbers, dropping their weapons, the Russian Defense Ministry said in a statement on Thursday, citing intelligence.

Ukraine's president is accusing Russia of carrying out missile strikes around the country.

The AFP news agency released images from a military airport in the eastern city of Chuguev after a Russian attack.

Residential areas of the city were also damaged.

Russian defense officials say their troops are targeting Ukrainian military facilities with high-precision weapons. They say the strikes have taken out infrastructure and suppressed air defenses.

They say the operation is not a threat to civilians. However, Ukrainian officials say the Russian attacks have killed more than 40 soldiers and wounded dozens of others.

They say a boy was killed in the country's east after Russian shelling struck an apartment building.

The attacks began after Putin made a televised speech, explaining the country was starting the operation. He said Russia does not plan to occupy Ukraine's territory.

Days earlier, Putin recognized two separatist regions in eastern Ukraine as independent. He ordered Russian troops to be deployed as what he called "peacekeepers".

In his speech, Putin suggested the action is intended to protect people who he says have been oppressed by Ukraine's government.

Ukrainian President Volodymyr Zelenskyy said, "We broke off diplomatic relations with Russia. Ukraine is defending itself and will not give up its freedom, no matter what Moscow thinks."

President Volodymyr Zelenskyy called on all citizens to come forward and defend the country.

The Russian military had deployed troops there for what it called military exercises.

Aggressions are also being reported in the South. Ukrainian officials released video of what they said were Russian military vehicles arriving from Crimea.

Ukraine welcomes US Offer Of Long-Range Rockets By Agencies 17 hours, 8 minutes ago

US Shoots Down China's Balloon, Says Defense Department By Agencies 17 hours, 23 minutes ago