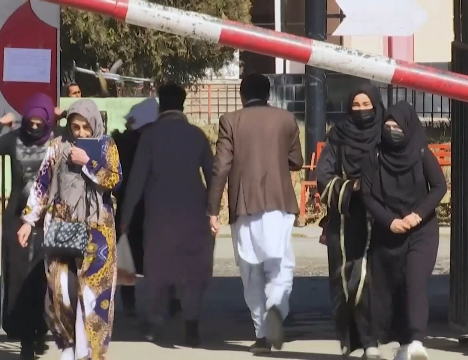 Public universities in Afghanistan have fully reopened for all students for the first time in half a year amid international appeals for improving women's education.

The Taliban closed public universities and banned female students from secondary schools after they retook power in August. The group said boys and girls cannot study in the same place under their interpretation of Islamic teaching.

The Taliban reopened 31 universities on Saturday. The other eight of the country's 39 public universities had already reopened in early February.

The university has separate class schedules for men and women. Women's classes start at 6:30 a.m. and men's classes at 4 p.m.

A female student said the Taliban reopened universities probably because of international pressure.

A spokesperson of the Taliban-run education ministry told NHK that all students including women are attending classes without problem. He added that the Taliban are committed to what they promised to the Afghan people and the international community.

The group says they will also reopen secondary school classes for women in late March.