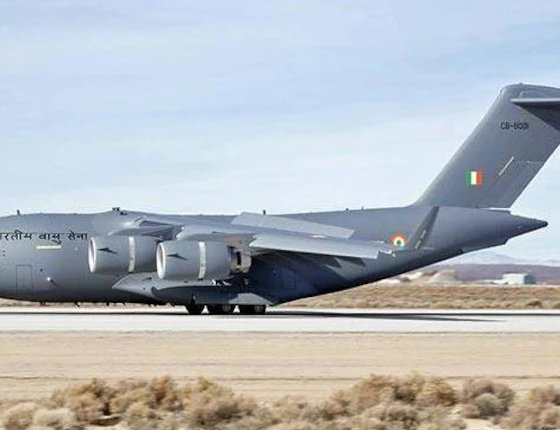 Under Operation Ganga, 1,396 Indian nationals have been brought back from Ukraine on six evacuation flights, many are on their way to the designated rescue locations on foot, in sub-zero temperatures.

India has been flying aircraft to Hungary, Poland, Slovakia and Romania - countries on Ukraine's western border of Ukraine - after Ukraine shut its airspace to civilian craft amid Russian air strikes on its military and strategic establishments.

The first evacuation flight under "Operation Ganga" arrived in Mumbai from Bucharest on Saturday with 219 Indians. So far, six flights have returned with students.

PM Modi, at a two-hour-long meeting on Sunday to take stock of the situation in Ukraine, had asserted that the government's top priority is to ensure the safety of Indian students and their evacuation.

The American C-17 Globemasters is one of the most capable aircraft for flying long distances with close to 400 on board. The C-17 transport aircraft helped evacuate citizens and officials from Kabul when the Taliban captured Afghanistan.

The Centre on Monday announced that Union ministers will travel to Hungary, Poland, Romania and Slovakia - all four countries share borders with Ukraine - to coordinate the evacuation of stranded Indians.

The Indian Air Force's military transport aircraft - the C-17 Globemaster - left for Romania at 4 am Wednesday to bring Indians from Ukraine under the Centre's mammoth rescue programme Operation Ganga. The aircraft took off from its home base - the Hindan Air Force Station - near Delhi.

The IAF aircraft will also help deliver humanitarian aid more efficiently to Ukraine, which is reeling under a shortage of food, fuel, medical supplies and other essential items amid the Russian invasion.