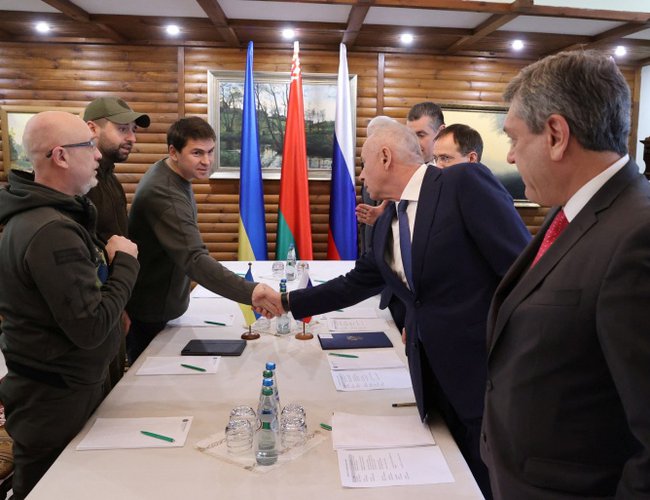 Negotiators from Russia and Ukraine have met for the second time for peace talks in Belarus. They emerged with a tentative deal on protecting civilians but no agreement on putting an end to the Russian invasion.

The negotiators agreed to organize the delivery of humanitarian aid to those caught up in the fighting. The Russians called this "substantial progress."

However, the Ukrainians said they did not get what they had hoped for, although they didn't say why. They plan to meet again next week to discuss a truce.

The head of the Russian delegation, Vladimir Medinsky, said the positions of both sides are clear and are written down point by point. He said they managed to find common ground on some of them.

Ukraine's Presidential Advisor Mykhailo Podolyak said the parties have reached an understanding about setting up 'humanitarian corridors' that civilians can use to evacuate.

Russian President Vladimir Putin made remarks about the progress of the invasion. He said the 'special military operation' is proceeding exactly according to schedule and that all objectives are being successfully accomplished.

He added that Russians and Ukrainians are "one people." But he alleged that Ukrainian forces have tortured and killed Russian prisoners of war.

Ukrainian President Volodymyr Zelenskyy made his own remarks, apparently in reply to Putin. He said the Russians should leave Ukraine, but if they stay, then he and the Russian president should sit down for direct talks.

He said that Ukrainians, including children, are being "blown apart." He denied that his country is attacking Russia and said it has no plans to.

President Biden In State of Union Exhorts Congress: ‘Finish The Job’ By Agencies 2 hours, 50 minutes ago