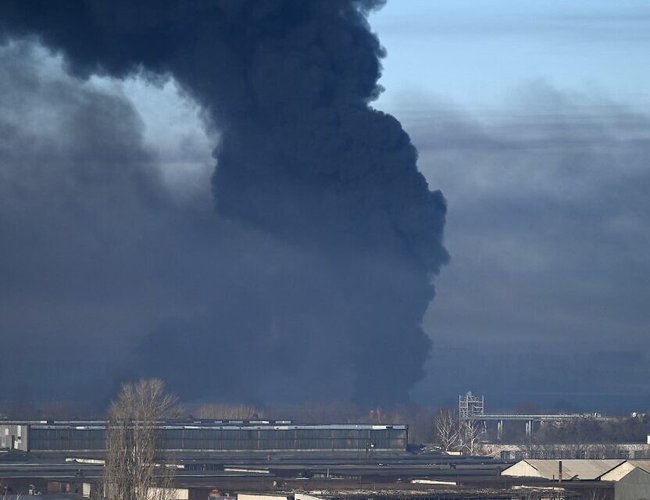 Zelenskyy said on social media on Sunday that Russian rockets hit the airport in Vinnytsia.

Meanwhile, civilian casualties are rising in Ukraine. International aid organizations are calling for the swift implementation of evacuation corridors for non-combatants.

People in the capital have been building and installing barricades on the streets to defend their city.

A woman said, "I want to fight also, because this is my country, this is my home, my thoughts, my family, and all of my precious. Everything is here."

Cities around the capital have suffered from harsh attacks.

The United Nations human rights office says 364 civilians have been killed in Ukraine. The UN officials say 759 others have been injured since Moscow's invasion on February 24.

The southeastern city of Mariupol is one of the hardest-hit areas. An international humanitarian group, Doctors Without Borders, says the city has no power, water or heating. Pharmacies are running out of medicine.

The two countries had agreed in their talks on Thursday to establish humanitarian corridors for fleeing residents.

Over 1.5 million Ukrainians have fled the country. The UN refugee agency says more than half evacuated to neighboring Poland. Other destinations include Hungary, Moldova, Slovakia, and Romania.

A large crowd took to the streets of the southern city of Kherson to protest the Russian invasion.

Russian officials announced they had captured a Ukrainian military base near the strategically important Black Sea port. The local governor says Russian forces have occupied the regional administration building.

Beijing Grapples With 'Zero-COVID' Unrest By Agencies 9 hours, 15 minutes ago