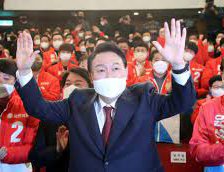 The candidate of the main opposition People Power Party Yoon Suk-yeol has beenelected South Korea's next president. In a neck-to-neck race, the conservatives will take back control after five years of liberal leadership.

Yoon said, "I think it's a victory of a great people. Now, the competition is over. I believe that all of us have to work together and unite for our people and our country."

The presidential race was tight from start to finish. People were anxious to see the result, but it was nearly 3:30 a.m. on Thursday when public broadcaster KBS finally projected Yoon to win.

Less than a single percentage point separated him and the ruling Democratic Party's Lee Jae-myung. Yoon's last-minute alliance with centrist candidate Ahn Cheol-soo may have been the boost he needed to secure the win.

Lee said, "We did our best but we couldn't meet expectations. Everything was my fault. It's not your loss, or the Democratic Party's. It's all down to me. I would like to congratulate candidate Yoon Suk-yeol."

Yoon, a former prosecutor-general, has no political experience, but he has been in the public eye.