China Plane Crashed: All Out Search For Black Boxes

China Plane Crashed: All Out Search For Black Boxes 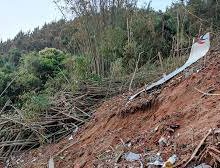 No survivors have been found so far after a passenger plane with 132 people aboard crashed in south China's Guangxi Zhuang Autonomous Region, an aviation official said late Tuesday reports Xinhua.

According to Chinese news agency, the China Eastern Airlines Boeing 737 aircraft, which departed from Kunming and was bound for Guangzhou, maintained an altitude of 8,900 meters as it entered the Guangzhou air traffic control area at 2:17 p.m. Monday, but was found to have drastically plunged at 2:20 p.m., Zhu Tao, head of the aviation safety office of the Civil Aviation Administration of China (CAAC), told a press briefing.

Air traffic controllers made repeated calls to the crew, but received no response. The plane lost its radar signal at 2:23 p.m. and was later found to have crashed in Tengxian County in the city of Wuzhou, according to Zhu.

No foreign nationals were on Flight MU5735, said Zhu, adding that the 132 people aboard were 123 passengers and nine crew members.

"Based on known information, the authorities do not yet have a clear clue as to the cause of the passenger plane crash," said Zhu. "The investigation is very difficult as the aircraft was severely damaged."

At present, the investigation team is carrying out a full probe in accordance with the procedures, with rescuers exploring the crash site and going all out to locate the black boxes, Zhu said.

Ukraine welcomes US Offer Of Long-Range Rockets By Agencies 5 hours, 51 minutes ago

US Shoots Down China's Balloon, Says Defense Department By Agencies 6 hours, 6 minutes ago