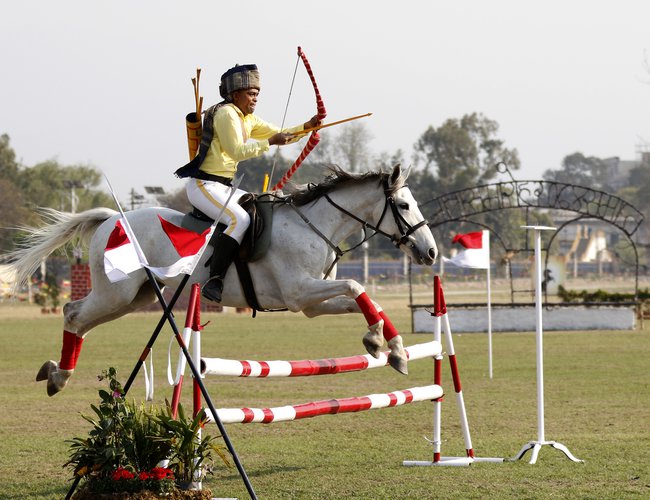 Pāhān Charhe (Devanagari: पाहां चह्रे) also known as Pāsā Charhe (पासा चह्रे) is one of the greatest religious festivals of the year in Nepal Mandala. It is celebrated with particular fervor in Kathmandu, and consists of a conglomeration of activities including parades, masked dances, horse racing and religious worship held over three days in different places. For More

Pahan means "guest" and pasa mean "friend" in Nepal Bhasa. Charhe means "fourteenth day of the lunar fortnight" when the festival commences. It starts on the 14th day of the dark fortnight of Chillā (चिल्ला), the fifth month in the lunar Nepal Era calendar. Inviting friends and relatives to one's home and honoring them with a feast is one of the highlights of the festival. Pahan Charhe is held according to the lunar calendar, so the dates are changeable. In 2015, the festival was marked from 19-21 March.

The celebrations start with the worship of the deity Luku Mahadyah (लुकु महाद्यः) in the evening. He is one of the forms of the Hindu god Shiva. Luku Mahadyah means "sunken Mahadyah", and his image is enshrined in a hole in the ground, often in a rubbish corner. Householders perform their devotions to the deity by making offerings of a feast including meat and wine. Rape blooms (लुँबुँ) and radish blooms (वहबुँ) are special offerings of the festival, and are considered to symbolize gold and silver respectively.

At Nyata in Kathmandu, sacred masked dances are shown on the stone platform at the street corner. It is known as Nyatamaru Ajimā Pyākhan or Swetkali Dance. The dance drama is performed by actors wearing masks representing various deities. The dance starts in the evening and lasts throughout the night. The historic neighborhood of Nyata is also known as Naradevi.

The main event of the second day, which coincides with Ghode Jatra, the horse festival, is the Dyah Lwākegu (द्यः ल्वाकेगु) ceremony at Tundikhel parade ground in Kathmandu where portable shrines of the Ajimā mother goddesses are brought together.

Images of seven mother goddesses Lumadhi Ajimā, Kanga Ajimā, Mhaypi Ajimā, Takati Ajimā, Mayti Ajimā, Yatamaru Ajimā and Bachhalā Ajimā are installed on portable shrines and paraded in their respective localities of Kathmandu. Late at night, they are carried on the shoulders of their attendants and assembled at Tundikhel accompanied by musical bands. After all the palanquins arrive, the Dyah Lwākegu ceremony is held when the entourages accompanying them exchange flaming torches symbolizing the meeting of the goddesses. The palanquin procession of the Ajimā goddesses was started by King Amar Malla in Nepal Sambat 580 (1460).

The idols of the gods of many localities are taken in a procession in their area in Kharpan and small Rath (portable chariots).

The community organize big feast at this time. A demon called 'Gurumumpa' is also propitiated at this time in Tundikhel. Idol of Gods Lumadi, Bhadrakali, Kankeshwari and Bhairav are brought to Asan chok during the day time at the main celebration and at night in Tundikhel. This day these Gods meet together every year. Godhe Jatra Falls within the festival of Pahachare.

Pahachare is the three-day festival of the Newar community. Pahachare means inviting guests in Newari language. This festival begins every year on the Chaitra Krishna Pakcha Chaturdashi (Krishna Pakshya is second half of a lunar month).

On the occasion, eight goddesses at different Shaktipiths (power centres) including Kankeshwori, Bhadrakaali and Mahankal are said to be activated through tantrik rites.

On the first day, people clean their surroundings and sewage considering it a worship of Lukumahadev. In the morning, they perform Puja and some people sacrifice animals. A feast begins at Ason where palanquins (khat) are dashed against each other beside the Annapurna temple. It is regarded as a symbol of meeting sisters. In the evening, idols of goddesses are taken around the city in a khat.

Ghode Jatra is organized on no-moon day of Chaitra Sukla Pakshya of Eastern Lunar calendar. This parade is organized and performed by Nepal Army and Police together. This occasion falls about mid March or early April of English Calendar month.

Ghode Jatra is second day. This day palaquins are placed in Tundikhel. An inebriated horse is also made to run in Patan. People invite their married daughters and sisters home for a grand feast on the second and third days.

It is said Ghode Jatra was organized to celebrate the victory over a demon named Tundi who reside over the field known as Tundikhel. Tundi was a big terror for t he people of Kathmandu. When he died people cheered by dancing onto his body with horses. It is believed that galloping of horses on Ghode Jatra at Tundikhel keeps the demon's sprit under the ground.

Lalitpur district also celebrates Ghode Jatra at Bal Kumari area. Horses are intoxicated with local beers and drunken men in traditional Newari dress ride on them. People cheer and shout to frighten and enrage the horses until they run fast and throw the men out from their back. People enjoy this occasion.