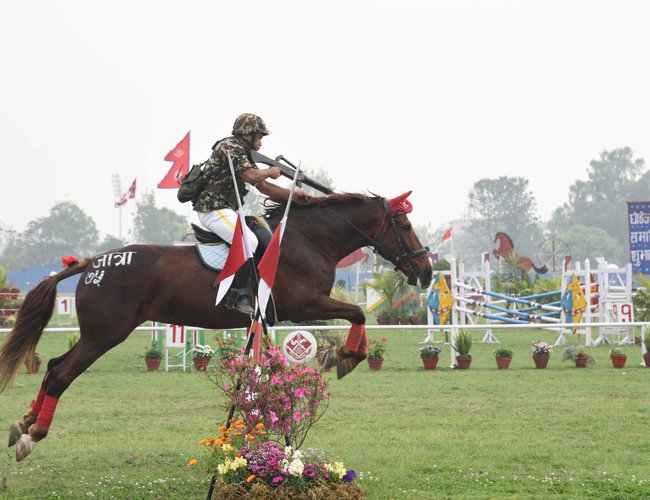 A grand horse parade takes place at Tundikhel, the central point of the city where many events take place. Legend has it that the demon Tundi was killed here. Ghode Jatra, the Horse Racing Day falls in mid-March or early April (March 17, this year).

Tundi had terrorized people for a long time until one day he was slain and people rejoiced by riding horses over his body. So it's believed that the clamor of horses' hooves at Tundikhel during the festival of Ghode Jatra keeps the demon's sprit at bay as it is believed he is still a threat to the city.

It is said that the faster the horses run, the quicker Tundi's spirit will be subdued; hence the horse racing and all the acrobatics at Tudikhel. The festival is attended by the army top brass, the top government officials and diplomats.

Huge crowds gather around Tudikhel to watch but they are not allowed to enter the Tudikhel. The army also takes it as an opportunity to display their skills as paratroopers drop down from planes flying close overhead.

Another event related to Ghode Jatra takes place at Bal Kumari in Patan where a horse is fed alcoholic spirits until it is intoxicated and an equally drunk person in a traditional Newari attire rides it. People shout to frighten and enrage the animal until it runs wildly with the rider clinging on to it for dear life.

Apart from the event, Ghode Jatra is celebrated specially by Newari communities. Considered as the original inhabitants of the Kathmandu Valley, Newars are people belonging to Newari communities with diverse culture, traditions and activities.

They carry away the deities, Goddess Bhadrakali and Goddess Kankeshwari over the narrowed streets of Asan just before the night of Ghode Jatra. While in other areas of Kathmandu Valley too, the deities of the respective locality are carried away in the streets with the chanting of music and instruments.

Every year, in mid March or early April, Kathmandu celebrates a festival of horse riding. There are horse parades in Tudikhel - a large open space in the middle of the city, along with competitions and celebrations that have changed over time. The entire program is carried out in front of politicians and heads of state. Its cultural side however is even more interesting.

Hundreds of years ago, after trading in Lhasa, people from Kathmandu returned home. They brought back porters and horses. Tudikhel was the area where the campers rested. In the inner city, whenever children disappeared, it was assumed that demons and cannibals had something to do with it. So in order to scare off these bad spirits, campers were asked to run horses around Tudikhel to suppress the demons and rescue the city from their evil grip. As a ritual, people gathered and fed the demons near the tree that is still located in the middle of Tudikhel. The food included typical Newari food of rice and meat all given to suppress the demons and assure a peaceful society free of devils and evil spirits.

The celebrations assure good health by the consumption of nutritious food and time spent with closed ones makes this day all the more special.

With time, the tradition of chasing away bad spirits by racing horses changed into a formal, national festival. The two very different aspects of the festival, formal and cultural, are what make it special for Kathmandu residents and visitors.

Pāhān Charhe (Devanagari: पाहां चह्रे) also known as Pāsā Charhe (पासा चह्रे) is one of the greatest religious festivals of the year in Nepal Mandala. It is celebrated with particular fervor in Kathmandu, and consists of a conglomeration of activities including parades, masked dances, horse racing and religious worship held over three days in different places. For More

Pahan means "guest" and pasa mean "friend" in Nepal Bhasa. Charhe means "fourteenth day of the lunar fortnight" when the festival commences. It starts on the 14th day of the dark fortnight of Chillā (चिल्ला), the fifth month in the lunar Nepal Era calendar. Inviting friends and relatives to one's home and honoring them with a feast is one of the highlights of the festival. Pahan Charhe is held according to the lunar calendar, so the dates are changeable. In 2015, the festival was marked from 19-21 March.

The celebrations start with the worship of the deity Luku Mahadyah (लुकु महाद्यः) in the evening. He is one of the forms of the Hindu god Shiva. Luku Mahadyah means "sunken Mahadyah", and his image is enshrined in a hole in the ground, often in a rubbish corner. Householders perform their devotions to the deity by making offerings of a feast including meat and wine. Rape blooms (लुँबुँ) and radish blooms (वहबुँ) are special offerings of the festival, and are considered to symbolize gold and silver respectively.

At Nyata in Kathmandu, sacred masked dances are shown on the stone platform at the street corner. It is known as Nyatamaru Ajimā Pyākhan or Swetkali Dance. The dance drama is performed by actors wearing masks representing various deities. The dance starts in the evening and lasts throughout the night. The historic neighborhood of Nyata is also known as Naradevi.

The main event of the second day, which coincides with Ghode Jatra, the horse festival, is the Dyah Lwākegu (द्यः ल्वाकेगु) ceremony at Tundikhel parade ground in Kathmandu where portable shrines of the Ajimā mother goddesses are brought together.

Images of seven mother goddesses Lumadhi Ajimā, Kanga Ajimā, Mhaypi Ajimā, Takati Ajimā, Mayti Ajimā, Yatamaru Ajimā and Bachhalā Ajimā are installed on portable shrines and paraded in their respective localities of Kathmandu. Late at night, they are carried on the shoulders of their attendants and assembled at Tundikhel accompanied by musical bands. After all the palanquins arrive, the Dyah Lwākegu ceremony is held when the entourages accompanying them exchange flaming torches symbolizing the meeting of the goddesses. The palanquin procession of the Ajimā goddesses was started by King Amar Malla in Nepal Sambat 580 (1460).