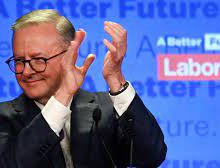 Australia's Labor Party has toppled the governing conservatives in Saturday's general election. Local media outlets report that the country will see the first change in government in nine years.

Australia's public broadcaster ABC reported that as of 5 a.m. on Sunday local time, the Labor Party was projected to win 72 of 151 lower house seats, the conservative coalition 50 seats, and independents 15 seats.

Labor Party leader Anthony Albanese is expected to form a new government, with support from independents and others.

Albanese told supporters on Saturday night, "Tonight, the Australian people have voted for change. I am humbled by this victory and I'm honored to be given the opportunity to serve as the 31st prime minister of Australia."

Albanese announced that he plans to attend the so-called Quad summit in Tokyo on Tuesday. The leaders of Japan, the United States and India are scheduled to participate in the meeting.

Attention is now focused on how the next administration will confront China. Albanese has shown his intention to maintain the policy of the outgoing administration.

Current Prime Minister Scott Morrison has taken a tough stance toward Beijing, together with strengthening ties with the US and Japan.

Russian Forces Hoping To Build On Gains In Eastern Ukraine By Agencies 8 hours, 46 minutes ago