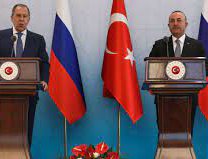 Russia's Foreign Minister met with his Turkish counterpart on Wednesday. They discussed a plan to restore grain exports from Ukraine's coast.

The two top diplomats spoke about ceasefire negotiations and shipping routes through the Black Sea.

The UN is calling to establish a secure sea corridor. But Russia claims Ukraine is blocking the shipments, and says the country's ports are heavily mined.

Russian Foreign Minister Sergey Lavrov said, "If the Ukrainian side can remove the mines or ensure safe shipments in the area with mines, we expect the issue could be solved."

Turkish Foreign Minister Mevlut Cavusoglu said, "As Turkey, we see it as a reasonable and implementable plan. But of course, both Russia and Ukraine must accept the UN request. We offer to host a meeting in Istanbul to discuss the details."

Beijing Grapples With 'Zero-COVID' Unrest By Agencies 1 day, 15 hours ago

Anti-coronavirus Curbs Erupt In Beijing, Shanghai And Elsewhere By Agencies 2 days, 15 hours ago