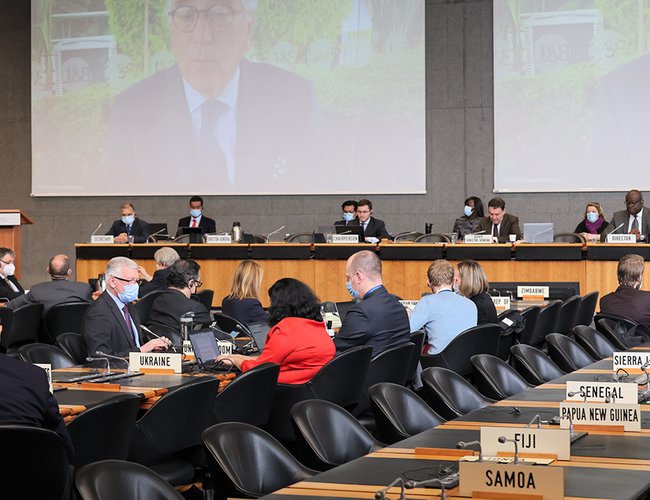 A World Trade Organization ministerial conference began in Geneva on Sunday. On the first day of the four-day meeting, representatives discussed the challenges facing the multilateral trading system.

The WTO aims to promote international trade through the system. But this fundamental principle has been shaken by Russia's invasion of Ukraine.

Some countries, especially developing nations, have been unable to secure enough food and energy amid sharp price hikes resulting from supply disruptions caused by the conflict.

Japan's State Minister of Economy, Trade and Industry Hosoda Kenichi condemned the Russian invasion as a unilateral attempt to change the status quo by force, and a clear violation of international law.

He also stressed the need for the international community to unite to help the multilateral trading system continue to function.

Delegates from about 60 countries and regions, including Japan, held a separate meeting to discuss support for Ukraine.

The participants issued a statement expressing their willingness to help Ukraine with its exports. They also called on other WTO members to do likewise.

The European Union organized the meeting. European Commission Executive Vice-President Valdis Dombrovskis told reporters that Russia's obstruction of grain exports must be removed as soon as possible so that Ukrainian farmers can receive compensation.

He said Russia's war against Ukraine is not only ruining the country's economy and killing thousands of people, but also threating the whole world with what he called a "hunger game."

Russian Forces Hoping To Build On Gains In Eastern Ukraine By Agencies 11 hours, 22 minutes ago