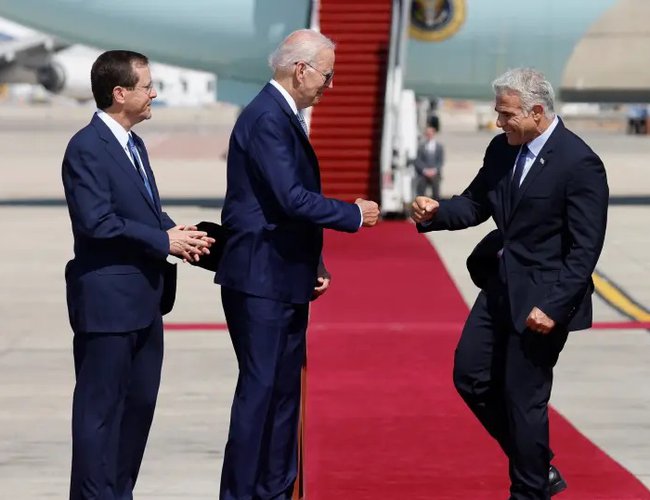 The latest updates from US President Joe Biden's first official trip to Israel since taking office.

US President Biden lands in Israel, meets with Holocaust survivors

US President Joe Biden landed in Israel on Wednesday afternoon, launching his first official visit to the country as president. Following is Biden's schedule for the visit:

“The only thing worse than Iran now is Iran with nuclear weapons,” US President Joe Biden said in an interview with Israeli media.

The US would use force “as a last resort” to stop Iran from developing a nuclear weapon, US President Joe Biden said in an interview with Channel 12 News that aired soon after he arrived in Israel on Wednesday.

“The only thing worse than Iran now is Iran with nuclear weapons,” Biden said, in an explanation of why the US continues to support the revival of the 2015 Iran deal. “I think it was a giant mistake for the previous president to get out of the deal. They are closer to a nuclear weapon than ever before.”

“We can act against [the Quds Force] and still have a deal that can curtail the nuclear program. I still think it makes sense,” he added.

Asked if the use of force against Iran was on the table, Biden responded: “As a last resort, yes.”

When interviewer Yonit Levy pressed Biden for details, he said: “I’m not going to speculate on that, but Iran can’t get a nuclear weapon.”

The president also said that he will keep the Islamic Revolutionary Guard Corps on the State Department list of Foreign Terror Organizations even if it means Iran will not sign back on to the agreement.

As for Biden’s next stop, in Saudi Arabia, the president said he is going to promote stability in the Middle East.

“It's an overwhelming interest of the US to have stability in the region,” he said. “Those that thought that the US was going to leave behind the Middle East and leave a vacuum that either China or Russia would fill – we can’t let that happen.”

Saudi-Israel normalization “is going to take a long time,” the president said, “but increasing the relationship in terms of acceptance of each other’s presence and working on certain things makes sense to me.”

Biden also said that “the more Israel is integrated in the region as equal and accepted, the more likely… it can come to an accommodation with the Palestinians down the road.”

Asked about Democrats who voted against funding for the Iron Dome and seek to curtail aid to Israel, Biden said “there are a few of them.”

Asked if there is a danger that the Democratic Party will turn its back on Israel, Biden said no, nor would the Republican Party.

As for visiting Israel during an election, Biden said that he is “committed to the state, not an individual leader.”

"We're strengthening our connections even further," Biden said on Wednesday after arriving at an airport near Tel Aviv, Israel. "We've reaffirmed the unshakable commitment of the United States to Israel's security, including partnering with Israel on the most cutting-edge defense system in the world." 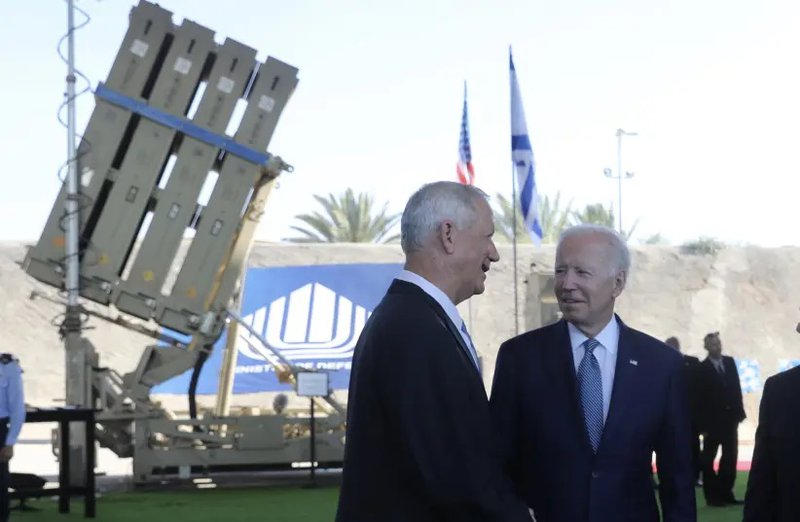 Israeli leaders have already normalized relations with their counterparts in several Arab countries. Biden wants to see such ties with Saudi Arabia, the leaders of which hold sway across the region. He will attend a summit of Arab leaders of the Gulf Cooperation Council in Jeddah.

Biden knows the challenge of Iran will loom over all these meetings. Iranian leaders have criticized efforts to bring Arabs and Israelis closer.

Biden will wrap up his trip on Saturday.