US, Israel Make Show Of Unity On Iran

US, Israel Make Show Of Unity On Iran 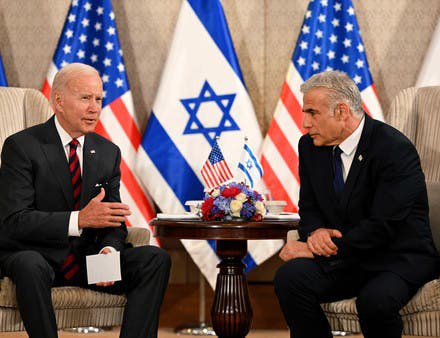 Leaders from the US and Israel have long been divided over how to approach their challenges in Iran. But President Joe Biden and interim Prime Minister Yair Lapid have stood side-by-side in a show of unity. They agreed the Iranians should "never acquire a nuclear weapon."

Biden and Lapid signed a declaration in Jerusalem on Thursday committing to strengthening the Israelis' capability to "deter their enemies." That includes confronting Iran's "aggression and destabilizing activities."

"I continue to believe that diplomacy is the best way to achieve this outcome," Biden said.

The leaders said they will use cutting-edge defense technologies, including laser weapons systems. They promised to "defend the skies of Israel."

Biden said he "won't wait forever" for the Iranians to return to a nuclear deal reached in 2015. His predecessor, Donald Trump, pulled out of the agreement three years later. Biden says Trump made "a gigantic mistake" and brought the Iranians closer to having a nuclear weapon.

"I send a message to America and its allies that the great nation of Iran will not accept any insecurity and crisis in the region. Any mistake will be met with a harsh and regrettable response from Iran," said President Ebrahim Raisi in a speech on Thursday.