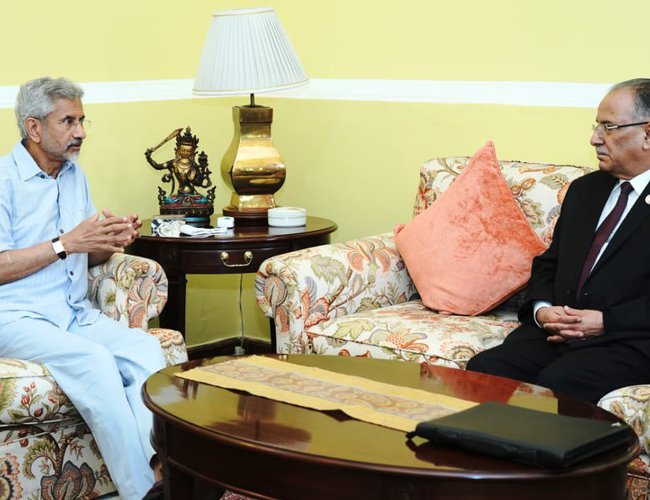 “A productive discussion on strengthening our neighbourly relationship with a focus on economic cooperation,” tweets External Affairs Minister Jaishankar following his meeting with Prachanda. “Reflecting our Neighbourhood First policy, India will remain a steadfast partner of Nepal in its quest for progress and prosperity.”

“Pleased to welcome @cmprachanda to India on his visit at the invitation of BJP President @JPNaddaji.”

India engages with former Prime Minister of Nepal, Pushpa Kamal Dahal (Prachanda), who is on a three-day visit to Delhi under the ‘Know BJP’ initiative reports New Indian Express.

With elections in Nepal scheduled for the end of this year, and considering Prachanda’s popularity with the Nepalese masses, India would like his coalition with Nepal’s Prime Minister Sher Bahadur Deuba to continue, say sources.

“India-Nepal ties have improved with PM Deuba and it works in India’s favour to continue the association based on goodwill, diplomacy, trade and cultural ties. PM Modi’s visiting Lumbini, the subsequent handing over of the West Seti power project to India and a train linking Delhi to Janakpur in Nepal are proof of the association strengthening,” say sources.

Foreign policy experts point out that it would not be in India’s interest for Prachanda to support former Nepalese Prime Minister Khadga Prasad Sharma Oli - as he favoured China.

“Prachanda is bargaining with both sides to become PM after elections. It is a known fact that whichever side Prachanda will be in Nepal will win a majority in the upcoming elections. So India would like him to support a coalition with Deuba,’’ say sources.

The present Nepalese government headed by PM Deuba is a five-party coalition alliance which has the support of Prachanda, Nepal Communist Socialist Madhav Nepal as well as Janata Samajwadi Party and Rastriya Janmorcha.

“Comrade Prachanda received a warm welcome at the airport in Delhi and was received by Vijay Chauthaivale and Nepal’s ambassador to India Shankar Sharma,’’ tweeted Prachanda’s office after his arrival in Delhi.

It has been reported that the invitation sent out to Prachanda was under the BJP’s outreach initiative called ‘Know BJP’ and one of the objectives under this is to engage with leaders of other political parties and even leaders from foreign countries.

“I am excited to visit India. This is my goodwill visit,” Prachanda said before leaving for Delhi.

Prachanda also refuted rumours that his visit to Delhi had any connection with the Chinese delegation’s visit to Kathmandu reports New Indian Express.

Japan Government And UN-Habitat Implement The Project In Nepal, Cambodia And Sri Lanka By NEW SPOTLIGHT ONLINE 1 hour, 50 minutes ago

Incredible Opportunity To Visit Patan Durbar Square In Nepal: US Under Secretary Nuland By NEW SPOTLIGHT ONLINE 5 hours, 7 minutes ago

US Wants To Make Its Collaboration And Strong Economic Relation With Nepal: US Under-Secretary Victoria Nuland By Agencies 11 hours, 33 minutes ago