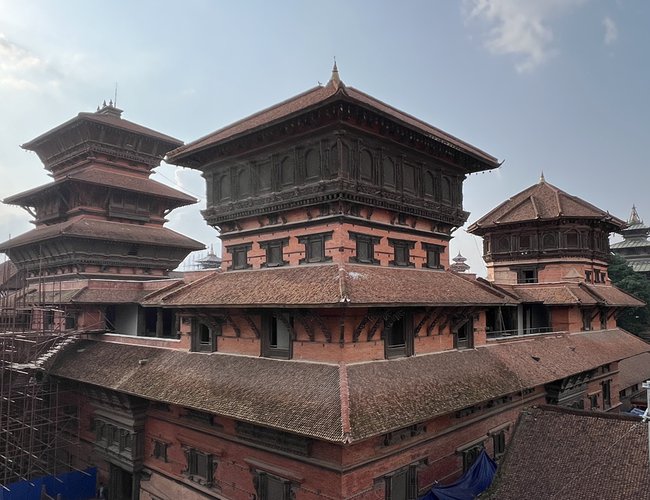 By Zhao Juecheng and Lou Kang

With the joint restoration of the earthquake-hit Basantapur Palace complex in Nepal, both the Chinese and Nepali sides are anticipating more projects in cultural heritage cooperation across Nepal.

The restoration of the main body of the Basantapur Palace complex at the heart of Kathmandu Durbar Square, a world cultural heritage site in Nepal's capital city, was completed as part of the first major cultural heritage restoration project China has conducted in Nepal, the Chinese Academy of Cultural Heritage (CACH) told the Global Times on Tuesday. The ongoing five-year project encompasses the restoration of the Basantapur Palace complex as well as exhibitions and others.

The Basantapur Palace complex, which previously served as a museum before the earthquake, is expected to reopen after the entire project is completed.

Experts work to restore the carved wooden walls of the Basantapur Palace complex. Photo: Courtesy of the CACH

Experts work to restore the carved wooden walls of the Basantapur Palace complex. Photo: Courtesy of the CACH

Initially built during the 17th and 18th century, the palace complex was part of the Hanuman Dhoka, the royal palace of the Malla Dynasty and the Shah Dynasty.

In April 2015, the Nepal earthquake, also named the Gorkha earthquake, struck near the city of Kathmandu, leading to nearly 9,000 people dead and thousands more injured.

The severe earthquake also damaged more than 600,000 buildings in Kathmandu and other nearby towns.

The top three stories of the Basantapur Tower situated in the southwest corner of the complex totally collapsed, and 80 percent of the complex walls suffered from varying degrees of deformation and cracking, while over 10,000 wooden components were damaged or scattered.

The restoration was an urgent task as the longer the relics in the complex were exposed to the elements, the higher the risk they would be damaged even further.

Launched in August 2017, the restoration project was fully aided by the Chinese government and guided by the National Cultural Heritage Administration of China, while the overall restoration task fell onto CACH.

According to CACH, the project team bore the dual tasks of the cultural relic protection and post-earthquake restoration, and the working team overcame many difficulties during the restoration. 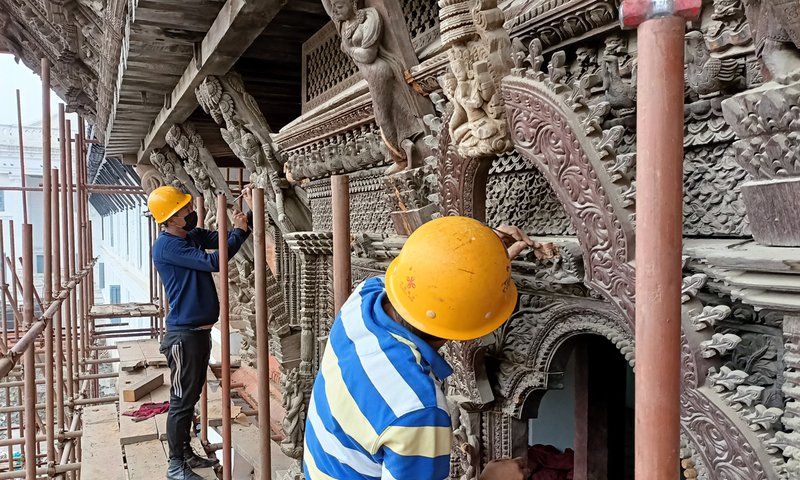 For example, while the Kathmandu Durbar Square, where the Basantapur Palace complex is located, was still open to tourists during restoration, thus ensuring the safety of visitors and the project became the priority of the team.

Other than that, in order to reinforce this brick and wood mixed building, the Chinese restoration team used a reversible soft connection - an innovative technology patented in China - to reinforce structure.

This enabled them to achieve a minimal intervention but preserve the historical information behind the complex to the most possible extent.

With a large number of exquisite wooden components and carvings including religious figures and patterns, as the old palace has an important position among its citizens.

To restore it as authentic as possible, the CACH said that the project's working group also involved craftsmen from a long line of woodcarving families in Nepal as well as made extensive use of old photos for reference.