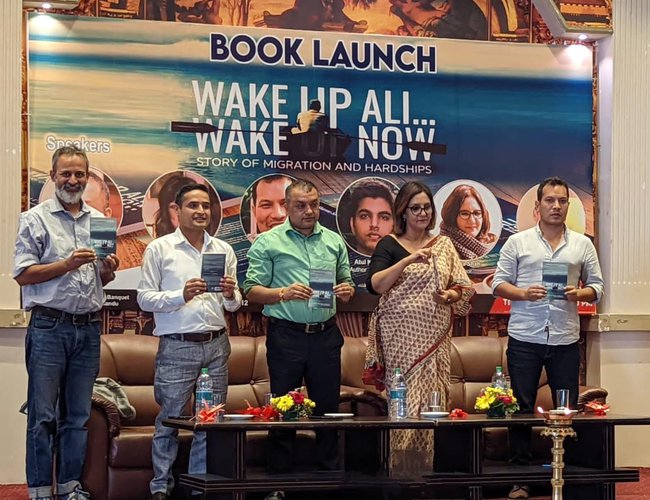 Wake Up Ali…Wake Up Now’, a novel by Sumit Sharma Sameer, was launched in Kathmandu on Friday (12th August 2022) amid a function. Speaking at the function, author Sameer said, “I wanted to communicate the stories of our time, the stories that I feel are important and need to be told. The stories of so many Alis have to be spelt out. Migration has been a permanent feature since the advent of human civilization. It got more accelerated during our age. That acceleration brought varied opportunities to mankind but yet dismantled the very fabrics of our lives. I had always wanted to write something on this very constructive and destructive process connecting South Asia into one thread that could help produce many other stories.”

Celebrated Nepali author, Buddhisagar said “Ali’s (protagonist) internal journey, self-exploration and realization are three highlights of books which is evenly mixed in a whole story. He also said “the book is not merely about migration, but rather has a deep philosophical meaning. The book can be finished in one seating and overall I really liked the book.” Ms. Saguna Shah, author & founder of bOOkahOlics, said the “novel explores the human psychic by exploring the constraints of relationships and desirs’. The content is far and beyond the concerns of migrant workers their status quo and their struggle in a foreign land, but also an internal journey of a protagonist. The book is about an awakening of the protagonist.”

Speaking on the occasion author & columnist Atul K Thakur said that “Nepal’s publishing industry is blossoming and Sumit’s novel reassures it. It is a pure piece of literary fiction with beautiful prose and narrative, should further make Nepal’s spot brighter in the publishing ecosystem. The writers and publishers in India and Nepal should enhance cooperation and work in unison, this will be another important pillar of bilateral relations. Sumit will be in great demand among the publishers.”

Australian ambassador to Nepal Felicity Volk, who is also a celebrated author, speaking on the occasion said, “This is a migrant story from South Asia. Number of Nepali people migrating to south Asia has doubled in last five years and I’m struck how well the writer has depicted the migrant story. But, this is also a universal story, story of each one of us. Each one of us is traveller in our own struggle.”

General Secretary of Nepali Congress, member of parliament and former Health Minister, GaganThapa, remembering his long time association with the writer said, “I have known Sumit for last 25 years and knew that he can write non-fiction, but he took me by surprise by writing fiction.” He further added ‘this is a sociological fiction. This is about social structure, human relationships and individual relationship to the society. This is a story of migrants. Story of diasporas, struggle in the modern day society. The conflict between migrants and natives, the opportunity cost. How one has to disconnect with your loved ones to get connected to the larger world to grab the opportunities. I could see through the characters how the whole process of globalization on one hand bring people together and at the other, same time, makes them dysfunctional. The protagonist compares his life with the life of an ant, he struggles to find his place, his identity in the larger cosmic design. There is an ongoing conflict between the material world and spiritual thought process. It is a powerful book.”

The book was earlier published in Nepali under the title ‘Prawas’ two years ago and has been translated by Sushrut Acharya in English. The English version, ‘Wake Up Ali…Wake Up Now’ has been published in 2022 by Delhi based, Vitasta Publishing.

Nepal Has Huge Potential As A Producer Of Green Energy: British Ambassador Pollitt By NEW SPOTLIGHT ONLINE 26 minutes ago