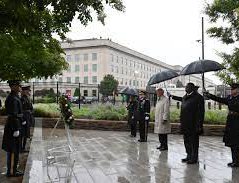 People in the United States have honored the lives lost in the 9/11 terrorist attacks, in which about 3,000 people including 24 Japanese nationals were killed.

Relatives of victims visited the former site of the World Trade Center in New York on Sunday, the 21st anniversary of the attacks.

Many of them laid flowers and touched the names of their loved ones inscribed on a memorial.

Participants of a remembrance ceremony at the former WTC site observed moments of silence. The names of victims were read aloud.

Terrorists hijacked four passenger aircraft on September 11, 2001. Two of them flew into the WTC twin towers and another into the Pentagon in Arlington, Virginia. The other plane crashed in a field near Shanksville, Pennsylvania, after a passenger revolt.

A museum in New York dedicated to preserving the memory of the attacks closed last month due to financial difficulties caused by falling attendance amid the coronavirus pandemic.

A man who prayed near the ceremony venue said he lost some of his friends in the attacks and that it is important to keep the memory of the attacks alive. He added that he is fearful that history may repeat itself if people forget the memory.