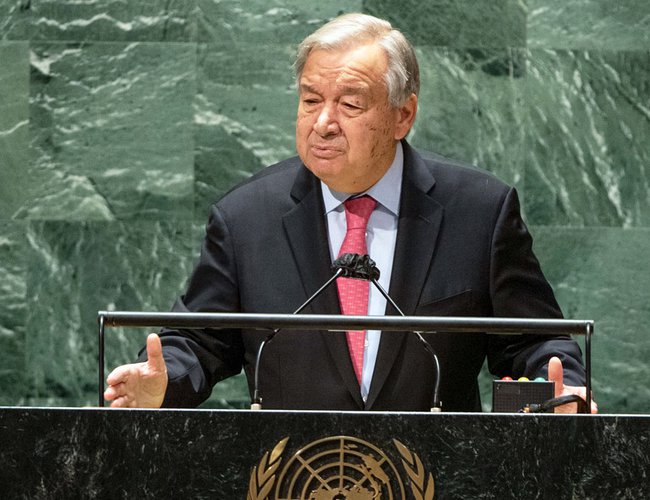 In a speech at the United Nations headquarters in New York, Secretary-General Antonio Guterres sketched a world "teeming with turmoil."

Guterres welcomed leaders to the General Assembly on Tuesday by cataloguing the challenges they face: war and shortages of food and energy.

He warned them that the world is "in peril and paralyzed." He said the United Nations Charter and the ideals it represents are in jeopardy. He criticized delegates for having "a duty to act" and yet being gridlocked "in colossal global dysfunction."

Guterres said divides are growing deeper, inequalities growing wider, and challenges spreading farther. He said no power or group alone can "call the shots." He urged leaders to work together in what he called "a coalition of the world."

Turkish President Recep Tayyip Erdogan cast himself as a "facilitator" in negotiations between diplomats from Russia and Ukraine. He said the war will not triumph and the peace process will not have a loser. He also stressed the importance of diplomacy and settling disputes through dialogue.

Erdogan spoke about how Turkish diplomats worked with UN officials to get grain stuck in Ukrainian ports out to global markets. He suggested they can take a similar approach to stop the fighting around Europe's largest nuclear facility, the Zaporizhzhia power plant.

He also underscored the importance of maintaining agreements brokered by the UN.

Ukraine welcomes US Offer Of Long-Range Rockets By Agencies 11 hours, 12 minutes ago

US Shoots Down China's Balloon, Says Defense Department By Agencies 11 hours, 27 minutes ago