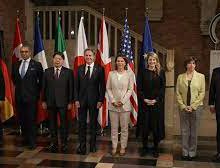 The foreign ministers of the Group of Seven industrialized nations have pledged their full support for Ukraine while warning against China's actions in the Taiwan Strait.

The ministers issued a joint statement after wrapping up their meeting in the western German city of Munster on Friday.

The statement calls on Russia to immediately withdraw all of its forces from Ukraine. It says any use of chemical, biological, or nuclear weapons by Russia would be met with severe consequences.

The ministers condemned Russia's attempts to leverage energy and food exports as a tool of geopolitical coercion. They said they will finalize implementation of the price cap on seaborne Russian oil in the coming weeks.

On Ukraine, they expressed their commitment to continue providing the financial, defense, political and other support to help the country meet its preparations for severe winter. They said they had established a G7 coordination mechanism to help Ukraine repair, restore and defend its critical energy and water infrastructure, and will discuss the issue at an international conference in Paris next month.

The statement also refers to China, where President Xi Jinping began an unprecedented third term as the leader of the Communist Party. The G7 members said they seek constructive cooperation with the country.

The ministers reaffirmed the importance of peace and stability across the Taiwan Strait and strongly opposed any unilateral attempts to change the status quo. They also expressed concern over the human rights situation in the Xinjiang Uygur Autonomous Region, Hong Kong and the Tibet Autonomous Region.

The statement also condemns the series of ballistic missile launches conducted by North Korea in 2022, which it says are flagrant violations of multiple UN Security Council resolutions. It demands the North abandon its nuclear and missile programs in a complete, verifiable and irreversible