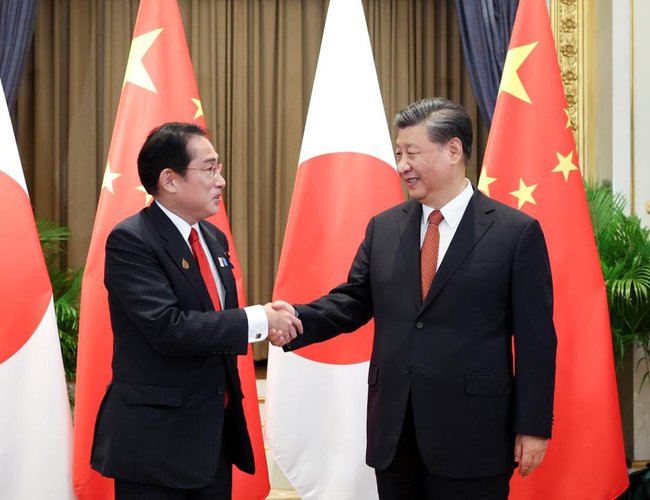 Japanese Prime Minister Kishida Fumio and Chinese President Xi Jinping have met in Bangkok. It marks the first bilateral in person summit for their countries in three years.

Kishida said, "It is important for both sides to accelerate efforts to build constructive and stable Japan-China relations."

Xi said, "We want to grasp the direction of bilateral ties from a strategic point of view and build relations that meet the demands of the new era."

The summit comes amid frequent incursions by Chinese government ships into Japanese territorial waters around the Senkaku islands.

Japan controls the islands. China and Taiwan claim them. The Japanese government maintains the islands are an inherent part of Japan's territory.

Kishida said, "I expressed serious concern about the situation in the East China Sea, including the Senkaku Islands, as well as China's ballistic missile launches and other military activities. I also reiterated the importance of peace and stability in the Taiwan Strait."

Kishida says he also raised the issue of human rights in China and the detention of Japanese citizens by Chinese authorities.

The leaders agreed to promote communications between the countries at all levels, including the resumption of ministerial dialogues. They agreed to arrange a visit by Japanese Foreign Minister Hayashi Yoshimasa to China.

Kishida expressed concern over North Korea's nuclear and missile programs, and urged Xi to play a role at the UN Security Council. They confirmed they would cooperate to solve the issue of abductions of Japanese nationals by North Korea decades ago.

Beijing Grapples With 'Zero-COVID' Unrest By Agencies 10 hours, 17 minutes ago