Make In Nepal Products Will Be Promoted: Secretary Gyawali

Make In Nepal Products Will Be Promoted: Secretary Gyawali 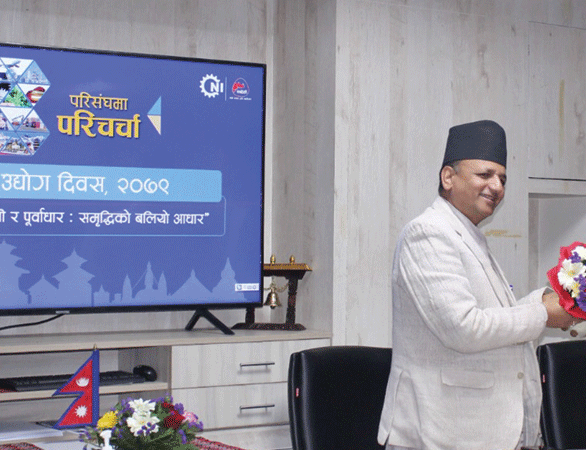 Secretary of the Ministry of Industry, Commerce and Supplies Dr. Toya Narayan Gyawali has said that the government is positive to give concessions to the members who join the Make in Nepal 'Swadeshi' campaign.

He made this remark at an interaction organised by Confederation of Nepalese Industries (CNI) on the occasion of the 8th Industry Day 2022.

He said that they were working on what should be the industrial policy for at least 10 years.

Director General of Industry Department Ramchandra Tiwari said that the CNI is effectively forwarding its activities for industrial development.

He said that the Confederation is moving forward with intensive studies for the development of the industrial sector and said that the government expects similar efforts from the private sector.

He said that industrial development can be achieved through the cooperation of the private sector and the government.

CNI President Vishnu Kumar Agrawal asked to give concessions to the members to the Make in Nepal 'Swadeshi' campaign, which the Confederation is implementing in collaboration with the government.

The Make in Nepal campaign is being conducted under the leadership of the government in India, Australia and other countries.

Agrawal said that the products involved in the Make in Nepal campaign will be given incentives to increase domestic production and export.

MCC-Nepal Issued An Tender For The Construction Of a Transmission Line By Agencies 8 hours, 34 minutes ago