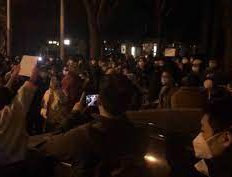 People in Beijing, Shanghai and other parts of China have taken to the streets to protest the government's anti-coronavirus measures.

Protests erupted in the Chinese capital on Sunday night to oppose the "zero-COVID" policy, which involves rigorous restrictions on people's movement.

Demonstrators chanted "We want freedom." They also held up blank sheets of white paper to express their opposition to curbs on free speech.

Similar rallies broke out in Guangzhou in the southern province of Guangdong and Wuhan in the inland province of Hubei, as well as on university campuses in Beijing and Nanjing.

Chinese authorities maintain stringent controls on freedom of speech under one-party rule by the Communist Party. It is extremely rare for protests against the party or the government to take place simultaneously in multiple cities of the country.

Government officials say the "zero-COVID" policy has been effective in stemming the spread of the coronavirus. But they are now believed to be nervous about signs that indicate protesters are shifting their criticism of the policy to the way the party governs China reports NHK.

Zelenskyy Meets With EU Leaders By Agencies 1 hour, 22 minutes ago