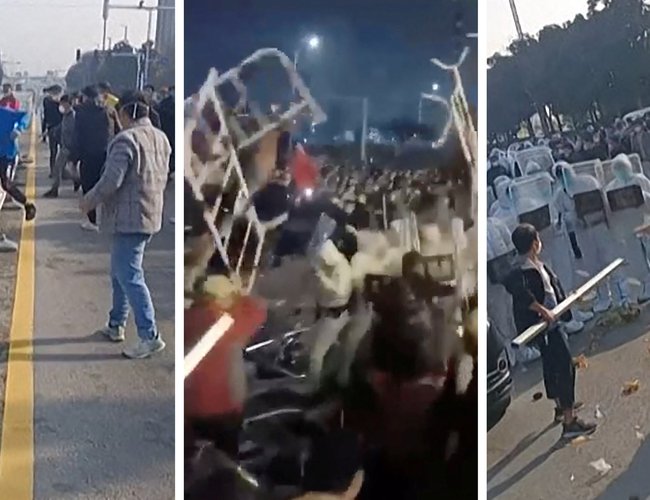 Chinese officials are grappling with protests against the country's strict "zero-COVID" policies.

Demonstrations were held in Beijing, Shanghai and other cities over the weekend.

Many protesters are calling on their governments to stop the lockdown in Beijing and elsewhere. Other protesters shouted, "We do not want lockdowns. We want freedom!"

They are demanding an end to pandemic lockdowns even as China recorded its highest daily coronavirus case count on Sunday of about 39,000 infections.

Some protesters go beyond COVID infections. They are urging the Communist Party and Xi Jinping to step down.

It was a rare showing of widespread opposition to China's Communist government which typically suppresses any dissent.

One of the protesters said, "These protests are what justice is all about. They are perfectly legitimate."

In Shanghai, police set up barricades on Monday after protesters clashed with police the night before.

Multiple people were arrested and a journalist with the BBC was reportedly beaten and detained. Chinese officials say he failed to display his press credentials.

Meanwhile, Beijing has avoided commenting on the protests. A Chinese Foreign Ministry spokesperson declined to comment when asked if there was growing discontent over pandemic policies.

Chinese Foreign Ministry Spokesperson Zhao Lijian said, "We believe that with the leadership of the China's Communist Party and the cooperation and support of all Chinese people, our fight against COVID-19 will be successful."

But the protests do appear to be impacting markets.

On Monday, a key stock index in Hong Kong plunged more than 4 percent following the weekend of unrest.

Ukrainian Soldiers Arrive In Britain For Tank Training By Agencies 1 day, 7 hours ago

Japan To Lower COVID-19 Classification On May 8 By Agencies 3 days, 6 hours ago