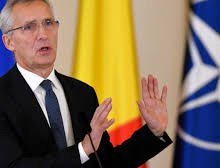 Russian forces have been launching frequent airstrikes against the Ukrainian power grid. Ukraine's allies say the Russians are trying to freeze them into submission.

NATO foreign ministers want to figure out how to help Ukrainians facing temperatures that have dipped below freezing. They say Russian President Vladimir Putin wants to leave people in the cold and the dark.

Stoltenberg said NATO will help repair energy infrastructure and fill the gaps with generators and fuel. US officials announced they would provide 53 million dollars toward that effort.

However, since October, Ukrainian leaders have seen Russian missiles hit their grid roughly every week. They are expecting another wave in the days to come. They have asked NATO to supply them with air defense systems to blunt the strikes.