16 Day Of Activism Against Gender Based Violence

16 Day Of Activism Against Gender Based Violence 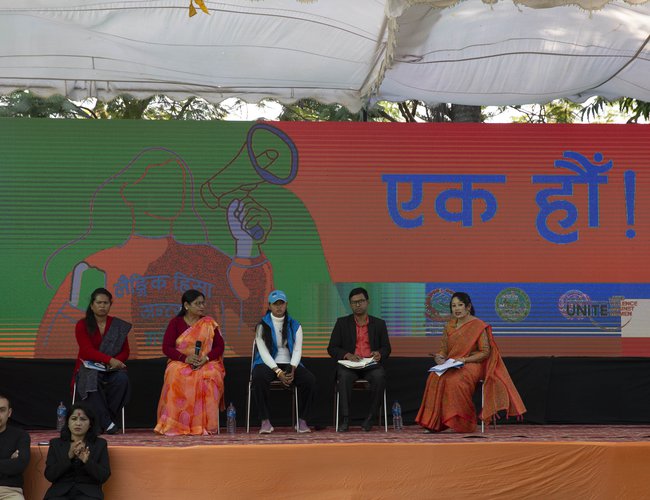 Gender-based violence (GBV) is a serious and widespread violation of human rights worldwide. Statistics tell us that in Nepal, GBV affects more than one in four women and girls in their lifetime.

Violence disproportionately affects women and girls who face multiple forms of discrimination based on disability, caste, or ethnicity, limiting their access to protection, treatment, and justice.

This year, on 30 November, the United Nations in Nepal and International Development Partners, marked 16 Day of Activism Against Gender Based Violence Campaign at the Dhangadi Sub-Metropolitan Office together with the Ministry of Social Development of the Sudurpaschim Province and representatives from Embassies, development partners civil society, and the women’s movement.

Speaking at the event, Ganesh Singh, Acting Secretary of the Ministry of Social Development, Sudurpaschim Province, urged everyone to unite to end gender-based violence.

This event served as a platform to mobilize keystakeholders to take action to prevent and respond to gender based violence against women and girls bystrengthening comprehensive essential services to survivors of violence;investing in reliable data collection on GBV; increasing programming on addressing gender discriminatory norms; and strengthening protection mechanisms to prevent and eliminate violence and discrimination against women’s rights advocates/activists in line with international standards.

Speaking on behalf of the United Nations in Nepal and as Co-chair of the International Development Partners Group, Elke Wisch, UNICEF Representative in Nepal, “Gender-based violence continues to undermine the rights, dignity, security and autonomy of women, girls as well as LBGTIQ+ persons particularly those from marginalized communities. Beyond violating the rights of each individual, neglecting women and girls undermines half the potential for progress, prosperity and well-being for all. It will therefore require a ‘whole of society’ effort to break down the silence and tackle the culture of acceptance to achieve zero tolerance for violence against women, girls and other marginalized community members.

Representing Bilateral Development Partners and Head of Cooperation, European Union Partner’s Group Co-Chair Dr. Marco Gemmer opined “We all, including men and boys, have our roles to play as individuals and beyond our mandates. It is not enough to not be involved of the violence- we need to champion the message that we will not accept, condone or let pass any kind of violence, and it is our obligation to speak up if we observe any instead of being silent. We need to be part of the change of these norms that also hurt us, by limiting how and what we -regardless of gender- should, can and want to be.”

The event, streamed live on Facebook, featured an interactive play advocating for the creation of safe spaces for survivors of violence from marginalized backgrounds whose needs are not met by existing systems. The event also featured a panel discussion featuring Sabitra Ghimire, Chair - Dalit Women Rights Forum, Sajina Pariyar - Child Club Member, Nirang Chaudhari - Sudurpaschim Samaj and Dr. Jagadish Bisht from the One Stop Crisis Management Center at the Seti Hospital in Dhangadhi, where the panelists called for greater action and resources to be committed to end the scourge of GBV in Nepal.

The 16 Days of Activism against Gender-Based Violence is an international campaign which takes place each year. It commences on 25 November, the International Day for the Elimination of Violence against Women, to 10 December, Human Rights Day. It was originated by activists at the first Women's Global Leadership Institute in 1991 and is coordinated each year by the Centre for Women's Global Leadership. It is used as an organizing strategy by individuals and organizations around the world to call for the prevention and elimination of violence against women and girls.

As a unifying theme running global activities, the UNiTE campaign has utilized the colour orange to represent a brighter future, free from violence against women and girls. For the past years, the UN Country Team (UNCT) in Nepal has been marking 16 days campaign with awareness building and advocacy campaigns across Nepal. Some of the key activities undertaken were ‘oranging’ monuments and provincial buildings, engaging audience across Nepal through films, social media, and radio campaigns.

Incredible Opportunity To Visit Patan Durbar Square In Nepal: US Under Secretary Nuland By NEW SPOTLIGHT ONLINE 1 hour, 23 minutes ago

US Wants To Make Its Collaboration And Strong Economic Relation With Nepal: US Under-Secretary Victoria Nuland By Agencies 7 hours, 49 minutes ago

US Under Secretary Nuland Pays A Courtesy Call On PM Prachanda By NEW SPOTLIGHT ONLINE 1 day, 3 hours ago