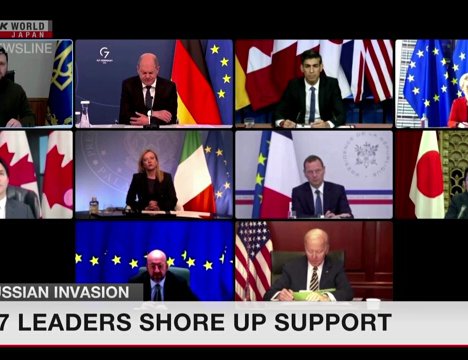 Ukrainian President Volodymyr Zelenskyy has called on Russian leaders to end the hostilities, in time for Christmas. He asked the heads of the Group of 7 nations on Monday for their help in bringing the fighting closer to an end.

Zelenskyy was invited to join a G7 meeting online. He asked for more air defense systems, howitzers, and long-range rockets to prevent any escalation of "Russian aggression." He said the "occupiers" should leave, and he doesn't doubt that that will happen.

Zelensky also addressed the energy shortages in his country. He said Ukrainians need an additional 2 billion cubic meters of natural gas to help them through the cold weather.

The leaders will also work to keep Ukrainian ports open. They said they would press ahead in supporting efforts to deliver grain through the Black Sea to countries in need.

G7 foreign ministers will pick up the discussions on Tuesday at a conference in Paris. They say Ukrainians will have their support "for as long as it takes."