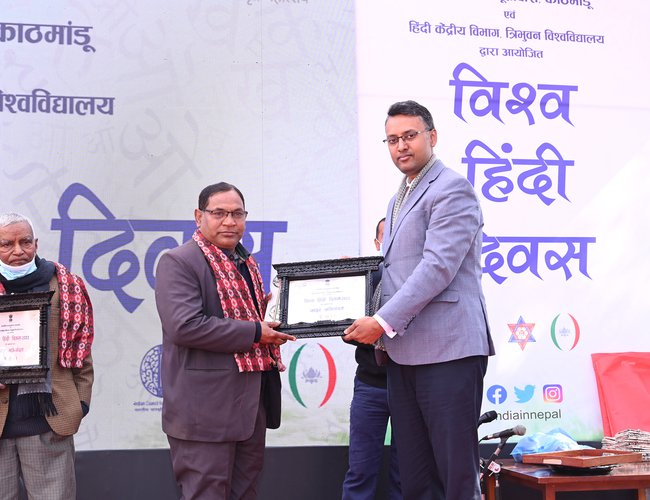 Member of Parliament and President, Hindi Manch Nepal, Mangal Prasad Gupta, graced the occasion as the Chief Guest. In his address he opined that Hindi has played an important role in deepening the cultural ties between Nepal and India. He also underlined the global importance of Hindi and its relevance in the international arena.

Dr.VimleshKantiVerma in his address shared his experience on Hindi research particularly in respect of its history, its connect with other international languages and evolution in the contemporary times.

Deputy Chief of Mission read out the message of Honorable Prime Minister of India Narendra Modi for the occasion. He remarked that World Hindi Day reminds us of linguistic heritage and identity of Hindi speakers. He expressed his gratitude to Hindi enthusiasts, scholars and litterateurs of Nepal who have contributed in further strengthening Nepal-India friendship through Hindi.

As a part of the programme, Hindi poetry recitation was organized for various schools of Kathmandu where students recited impactful poetry on the theme ‘Azadi KaAmrit Mahotsav’. TU’s M.A students of the Hindi Department were also felicitated on the occasion.

Nepal-India KaviSammelan was also organized in the second session of the program in which distinguished poets recited poetry in Hindi, Urdu and Nepali languages and enthralled the audience.

Malaysian Home Minister In Nepal By Agencies 23 hours, 23 minutes ago