Nepal and the World Bank Group: 50 Years of Development Partnership 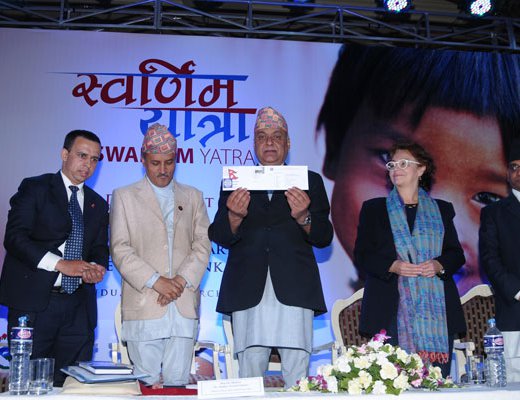 “Nepal has achieved impressive development results in the face of tremendous challenges.  These results set it apart from other post-conflict countries,” said Isabel Guerrero, the World Bank Vice President for South Asia.

Addressing a special event to commemorate fifty years of development partnership between Nepal and the World Bank Group, Guerrero cited numerous examples of progress over the past five decades with regard to poverty reduction, expansion of infrastructure and public services, and improvements in human development.

“A child born today in Nepal can expect to live 25 years longer than one born in 1970.  And today, almost all children go to school and live within 30 minutes of their schools,” said Guerrero.  She also noted Nepal’s strengths going forward in terms of a young population, a growing private sector, a long tradition of community-led development, and support across the political spectrum for scaling up development.

“Nepal’s ability to continue these impressive social developments will depend on achieving greater political stability; supporting private sector by removing existing bottlenecks to investments; and investing in infrastructure,” she said, adding that this will also require making the governance structures and institutions more effective and accountable.

Guerrero reaffirmed the World Bank Group’s continued support to Nepal’s development in the coming years and said its assistance strategy will continue to align with those of the Government and Nepal’s larger community of development partners.

Looking ahead, the country faces two challenges on the poverty front, said Mr. Ghimire.   “We need to ensure that people do not revert back below the poverty line and we must challenge ourselves to reduce the poverty rate to single digit during this decade,” he said.  The new Interim Three Year Plan will set the stage for pro-poor policies, including trying to secure better outcomes through improved governance, he added.

At the event, the Government of Nepal also released a special commemorative postage stamp to mark fifty years of development partnership between Nepal and the World Bank Group.

Ghimire and Guerrero also jointly inaugurated an exhibition of photographs and videos showcasing Nepal’s key development results over the past five decades.

The exhibition features photographs and videos on Nepal’s achievements in development results in the areas of inclusive growth and productivity, human development, social protection and gender equality.

The World Bank Group fielded the first economic mission to Nepal in 1963 to assess the country’s development prospects and challenges and approved its first credit in 1969 for a telecommunications project.  Since then, the World Bank has provided Nepal US$ 2.6 billion in credits and US$ 975 million in grants.  Currently the Bank is supporting 17 projects worth US$ 1.35 billion.    The World Bank provides about US$ 200 million in new financing to Nepal every year through its concessionary window, the International Development Association (IDA).  The International Finance Corporation (IFC), the private sector arm of the World Bank Group, currently has an investment portfolio in Nepal of about US$ 50 million and US$ 635,000 in advisory services.

Ambassadors From Thailand, Israel, Bangladesh And Myanmar Present Letter Of Credence To President Bhandari By NEW SPOTLIGHT ONLINE 1 day ago

Save The Children Calls For Protection Of Children In Nepal By NEW SPOTLIGHT ONLINE 4 days, 4 hours ago