Although a month has already passed since the formation of the election government, it is yet to make any concrete move 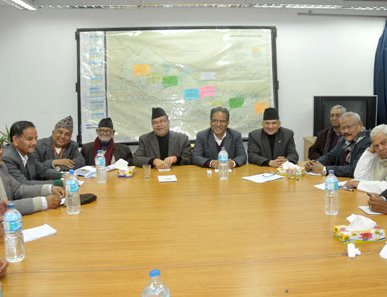 President Dr. Ram Baran Yadav is in his hometown Janakpur for rest. Similarly, chairman of Council of Ministers Khil Raj Regmi is busy making administrative and other changes, including initiating the dialogue with various political forces. The Election Commission is busy in meetings. Leaders of political parties are very much uncertain about their coming course of action.

What all these indicate is that no one is seriously working in the priority areas. As per the agreement, the priority of all political forces should be to hold the elections of Constituent Assembly by November as they have already missed the deadline of June.

Given the present political scenario, it is now almost uncertain whether to have elections in coming November.

“This government is not serious to hold the elections and it is performing like an elected government,” thundered Maoist chairman Puspakamal Dahal Prachanda. “Instead of dilly dallying, the government must work to announce the election date.”

In an all-party meeting, chief election commissioner Nilkanth Upreti asked political parties to create the a conducive environment to hold the elections in November. Since a group of political workers led by CPN-Maoist has been disrupting the voter registration process throughout the country, it hampers the initial process of issuing the voter identity cards.  Similarly, another political group led by Madheshi Janadhikar Forum, which is negotiating with the government, demanded the dissolution of four party high level mechanism as a pre-condition to hold the elections. The overall political scenario is yet to improve.

As the political disputes grow, president Dr. Ram Baran Yadav has already directed chairman of the Council of Ministers Regmi to initiate negotiations with other political parties.

“The government will hold further negotiations with political parties to create conducive environment for elections,” said president Yadav at his residence in Janakpurdham.

Whether one likes it or not, creating conducive environment for holding elections will be a far cry.

“Elections Commission can hold the elections in conducive environment. It is the political parties and government which need to work to make all the necessary arrangements,” said an elections commissioner on condition of anonymity. Of course, we have now acts and necessary laws to start the elections process. However, they are alone not enough. Even in the past, the election was postponed several times due to misunderstanding among the political parties over the date.”

As all who matter are busy with their own schedules, the elections seem to be no one’s agenda at the moment.

POLITICS Uncertain Future By A Correspondent 2 days, 10 hours ago