"Nepal has achieved a lot in the peace process" 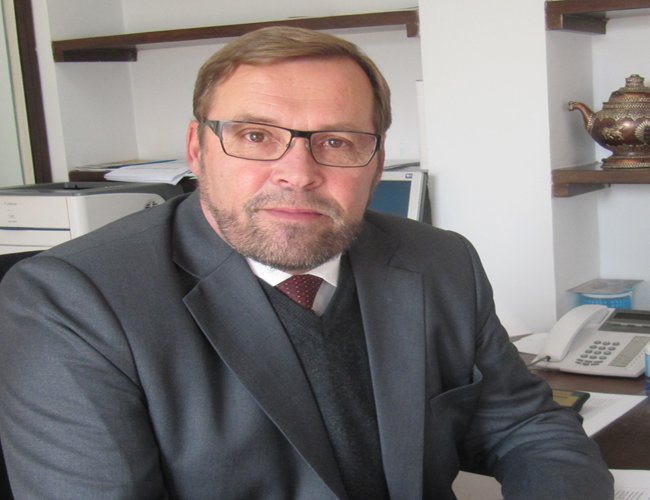 Having spent long time in Nepal, Ambassador of Finland to Nepal ASKO LUUKKAINEN knows many things about Nepal. At a time when Nepal has been passing through a political crisis, Ambassador Luukkainen Asko spoke to NEW SPOTLIGHT on various issues. Excerpts:

How do you see the present state of Nepal in the context of coming elections for Constituent Assembly?

I am happy, that the Interim Electoral Government was finally appointed. This decision was actually the only way out of the political stalemate in the country.  The parties still seem to have different opinions about the size of the CA, threshold of seats, convicts contest etc. But I believe that these issues can be solved. On the other hand I am disappointed at some parties who are saying that they are not going to participate in the elections unless their numerous demands are not met.

Why are they putting demands?

That is a good question which everybody should contemplate. I believe the elections are the only way to measure each party´s support and therefore every party should be ready to be subject to this measurement. If party is not participating in the elections it cannot claim that it has people´s support since it has no evidence of that.  Therefore, I appeal to those parties planning not to participate, please attend. That is the only democratic solution.

International community has been expressing concern over two ordinances related to transitional justice system. How do you look at it?

The country has not held local body's elections for last 18 years. How it has been affecting Nepal's development process?

When there are not locally elected bodies, the transparency of the governance system is weakening. People are not heard thoroughly, the decisions are made by bureaucrats. I am one of bureaucrats myself but under strict surveillance of elected representatives of different bodies. I think this is fair; the system works much better when elected bodies are in place. We bureaucrats are then under monitoring.

We are assisting Nepal in rural areas for example in rural water supply and sanitation. The problem here is again the missing local bodies. Decisions regarding our investments are made by bureaucrats, not by people who have the mandate from the elections.  So my opinion is that development process has become slower since local bodies are missing.

Finland is one of Nepal's major development partners. How do you see the Finland supported project in Nepal?

We are active in three different sectors, education and human rights and democracy, rural water supply and sanitation and forestry of course. Our support to the civil society through NGO`s is also substantial, our yearly support to Nepal is about 23 million euro´s (2.5 billion rupees). In addition to that comes the support to NGO`s. The support has been increasing during the last years but at the moment we are in a waiting mode. First election then will be possible to increase in the aid to Nepal. Our program as such I like, it is supporting in the areas which are of utmost importance to Nepal and targeted to the poorest of the poor.

Nepal has been passing through number of political turmoil. How it has been affecting Nepal's dev elopement process?

This is a question people who are Nepali citizens should answer. The recent history let us say from 1996 when the civil war started, has led to fundamental changes in the country. Nepal is not a Kingdom anymore but has not yet been able to stabilize the democracy in the country either. Civil war did definitely hamper the development but it can in the long run benefit the country a lot. But now consensus regarding the polls and the new constitution is needed, people of Nepal, who have been waiting this a long time, are really worthy of that.

What are Nepal's major challenges?

If we leave away the politics and the need to be able to make compromises between the parties I would say that the economic development of the country is the biggest challenge. And without fundamental increase in the energy supply the development is almost impossible. So for me number one is energy supply increase which would immediately help the local industries to lower their production costs and create new jobs. Everybody in the country would benefit. Nepal has so much hydro power available that it could be an important exporter of electricity in the region and become really wealthy. This huge opportunity has so far been missed. The beauty of hydro power is that it is there forever. The oil producing countries which are now doing extremely well are finally not in such a happy situation.

How scarcity of energy hampering the progress?

One interesting aspect in the poor energy supply (which was much better in 2000-2004 when I was working in Nepal for the first time) is the bad image which it is creating to Nepal.  We do not think this often. But when people come to visit Nepal from abroad and realize that the load shedding is 10-14 hours per day they immediately start asking why the situation is so bad in a country which has huge reserves of hydro power.  And what are the answers to these questions? Normally people blame the politics, bad governance, corruption and what not. So almost immediately the visitors hear negative things from Nepal. By providing sufficient energy this kind of questions/answers, which are not good for Nepal´s image, could be avoided.

One thing above all the others: I would change the culture of organizing bandha´s as a political weapon. Bandha´s hurt the economy, make people´s life extremely difficult, create violence, are against fundamental rights of the people like freedom of move in the country and finally erode the support to those who organize bandha´s.  Nobody likes bandha´s, on the contrary people dislike them very much. Therefore it simply does not make any sense to organize bandha´s. Bandha´s have been defended by saying that they have always been part of the politics. That is true but if we always say that we do this way since we have always done things like this we would still lives in caves! My suggestion is that in the new constitution bandha´s should be forbidden. The parties could agree on this and solve their differences of opinion in the elected CA/parliament, not on the streets.

Finland has been supporting Nepal's peace process in the last seven years. As Nepal is in the final stage of completing peace process, what is your comment on the peace process?

In the peace process Nepal has achieved a lot during the last years. When I was working here during the years 2000-2004 the civil war was escalating and the future of the country looked gloomy. Now things are much better.  But still the parties need to get closer each other in order to be able to stabilize the democracy. We all know that the people of Nepal have the desire to peaceful life with regular elections, they should not be kept in uncertainty anymore.

In case, Nepal fails to hold the elections for CA, what will be its domestic and international implications?

Extremely difficult question and my answer is pure speculation. But I have been following Nepali politics fourteen years now and I have a feeling that if Nepal fails to hold elections the civil society will not swallow that easily. There have lately been some signs of the increasing activism of the civil society in common issues in Nepal. Maybe there will be a strong peaceful non political movement which will put pressure on the political leaders. I do not believe that any group or party is in favor of violence should the country fail in holding elections. We all have seen how much country needs to suffer if violence would take over.

Do you have any message to people in Nepal?

I have now lived in Nepal more than five years altogether and this journey continues. During these years I have developed a deep affection to hardworking Nepali people who have lived through difficult times but who clearly love their country an also believe in country´s future.  The bright future is coming, I am sure. Above I spoken about the huge possibilities in the energy export, that is one possibility. But also tourism and agriculture will give a lot to the country and we never know what other possibilities are waiting behind the corner, ICT maybe? Wish all the best to Nepal!