Despite the widespread crisis of water and sanitation, Nepal’s political parties are yet to make sanitation as their election agenda 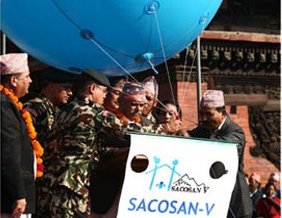 At a time when the global partners have hailed Nepal’s achievements in the area of sanitation coverage, Nepal’s political parties, which are contesting the national elections on November 19, are yet to make it their election agenda.

After hosting the SACOSAN-V successfully, Nepal has sent a most important message to the global community that partnership of government, civil society and private sector can make a lot of difference to increase people’s access to sanitation.

In its ten-point declaration, the delegations of the region expressed their commitments and agreed to an open defecation free South Asia by 2023 and progressively more towards sustainable environmental sanction in order to achieve the commitments.

Although Nepal’s half of the population still go for open defecation and annually, over 6000 children die of diarrhea  due to lack of proper sanitation and supply of drinking water. Similarly, thousands of others are admitted to hospitals for treatment of water-borne diseases. Yet, Nepal’s political parties do not seem to show any real concern about it.

Despite the apathy from the political leadership, Nepal has made certain progress in sanitation sector. Ashutosh Tiwari, country director of WaterAid Nepal writes in his Facebook wall that even citizens of small towns near Boston city of the United States of America launched a campaign to make their locality open defecation free zone. According to Tiwari, they were inspired from Nepal’s current trend of declaring many places open defecation free zones.

While the government has set 2017 as the deadline for meeting the universal target for access to basic sanitation by all the citizens of Nepal, the present achievement rate has been sluggish. Nepal government has to declare all 75 districts as ODF in four years. But, only 915 VDCs among the total 3915 have become ODF till now, which is only 24 percent of the total VDCs.

Despite making progress, Nepal has long way to go before achieving the progress.

Nepal And India To Give Priority To Butwal-Gorakhpur Transmissionline By NEW SPOTLIGHT ONLINE 2 days, 21 hours ago

UNHCR Shut Down Its Bhutanese Refugee Office In Nepal By Agencies 3 days, 12 hours ago