THE NEW GOVERNMENT: Not At Home

As the wrangling over a government portfolio mars the installation of an elected government after months of uncertainty, the common hopes that the major political parties will chart an uncommon journey to put in place a long-overdue constitution are 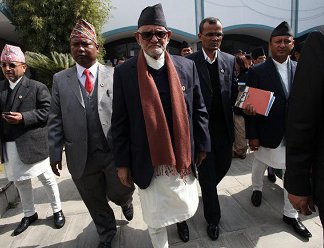 The Aam Aadmi Party (AAP)’s victory in the legislative elections in the neighbouring India's capital saw the party’s poster boy  Arvind Kejriwal grab nationwide headlines for his squeaky ‘clean’ image.  Kejriwal was the talk of the town; the media covered him, he was praised for his simplicity and ability to connect to the Aam Aadmi and the people were upbeat about a new CM.  There have even been suggestions that Kejriwal could move over to the 7 Race Course after the impending Lok Sabha elections. That may be a far-fetched suggestion, but across one of its key neighbours a septuagenarian, described by a popular news portal as a "new Kejriwal" has been sworn in to the office of the country's chief executive.

But unlike in what most Nepalese politicos see as their Mecca, the political atmosphere is neither upbeat nor are the people too excited about getting a new  Prime Minister notwithstanding his "clean" image in the nauseatingly corrupt politics that has pervaded the country.

The elections of the Nepali Congress president Sushil Koirala as the sixth prime minister in the seven years of a republican Nepal by more than a two-thirds majority of the 601-member constituent assembly brings an end to a long-standing political deadlock that last year saw a non-political figure overseeing the second elections for the constituent assembly. His innings has however started with the specter of a fresh deadlock.

Even before the government has been formed, the chronic party infighting has re-surfaced. Following the row over the coveted Home Ministry the Nepali Congress' perceived partner in the government, the United Marxist Leninist (UML)  in the journey to the constitution-making  has decided to stay away from the government.

That Nepal has got an elected government after the previous constituent assembly was disbanded even before it could formulate a new constitution should in normal circumstances have been a harbinger of hope and confidence for the future. Unfortunately, this has not been the case. The beginning of the popularly elected government could not have been more inauspicious with the two largest parties of the constituent assembly sparring in public over what is seen as a plum portfolio instead of a bonhomie over what is the most important task ahead -- the constitution making.

The Nepali Congress and the UML may patch up their differences and get down to the business of governance sooner or later, but the falling  out of the largest and the second largest parties even before the government has been formed certainly does not bode well for a country that has been longing for the elusive stability through a long-overdue new constitution.

Even more alarming is the infighting within the parties. In fact, the row over the home portfolio was the reflection of the deep infighting in the two big parties which apparently have not learnt lessons despite the voters giving them a second chance over the Maoist party which they severely punished by pushing the former rebel outfit to the distant third position in the recent elections.

According to sources, the aspirants of the home portfolio in the Nepali Congress were not happy with the gentleman's agreement the party's negotiators reached, with the tacit approval of Koirala, with the UML to give away the coveted portfolio. Former prime minister Sher Bahadur Deuba whom Koirala had defeated in the elections for the party's parliamentary leader was on hand to fuel their anger. This forced Koirala to call up the UML leaders and tell them that his party will keep the home ministry. After all, Koirala can ill afford to ignore Deuba who commands almost half support in the party.

The UML had no different story either. Having been bumbled in the race for the parliamentary leader through a last-minute dramatic alliance between K.P.Oli and Bamdev Gautam, chairman Jhalnath Khanal and former party chief Madhav Kumar Nepal were hell bent on stopping Gautam from becoming home minister.

The ganging up of two former deputy prime ministers in the election  for  parliamentary party leader, in which Oli emerged winner with the support of Gautam who was assured the prize of home ministry, was something the two former prime ministers could not stomach.

Even as the UML put up a rebellious posture in public over the denial of the home ministry to it and boycotted Koirala's swearing in, the Nepal-Khanal combine was only too happy with the developments. Coincidentally, the two happened to attend the swearing-in ceremony in the capacity of "former prime minister."

Nepal has got a popularly elected government after months of uncertainty is no doubt a welcome development but the spectacle with which it has started is most unwelcome. This could prove ominous unless the parties mend their fences and keep their respective houses in order so as to bring back order and stability in the country by framing the new constitution within what they have vowed to -- in a year.

Soon after Sushil Koirala was appointed the new Prime Minister, congratulatory messages poured in from both the neighbors.

"On behalf of the Government and people of India, please accept my warm felicitations on your election to the high office of Prime Minister of Nepal. Your election represents one more important milestone in consolidating and institutionalizing recent democratic gains in the course of the political transition in Nepal,” said Indian prime minister Dr. Manmohan Singh in his message.

Singh expressed confidence that Koirala’s leadership and guidance would strengthen stability and economic development in Nepal and foster a climate for promulgation of a new constitution.

The spokeswoman said that the Chinese side stood ready to make joint efforts with the Nepali side to strengthen traditional friendship and deepen reciprocal cooperation to step up the bilateral relationship in a sustained way.