In attracting over half a million visitors, the Renewable Energy Week showed the growing search of people for renewable energy 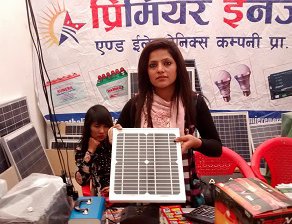 As Nepal Electricity Authority (NEA) announced two addition hours of power outage, the rush of the people to the Renewable Energy Week venue drastically increased in the last two days. The rush was understandable because the NEA decision had shattered the hope of urban people to get more electricity over time.

“The last two days were hectic. I sold out everything I had brought here,” said managing director of New Gandaki Renewable Energy Company. The government’s decision to provide subsidies in 13 urban areas also helped increase our sale.

In the urban areas like Kathmandu, solar power has become a viable renewable energy source. As the new technology is coming, the prices of solar panel and solar system are gradually declining, making them more accessible to more people.

Most of the companies taking part in the show said that the installed capacity of solar system ranges from Rs.6,300 (60 dollars) with four lamps and portable solar PV to Rs. 75,000.00 (700 dollar) for a solar system capacity to meet almost all household requirements.

According to Alternative Energy Promotion Center, the transaction reached over 150 million rupees during the energy week. This is much higher than what one expected in the last few years.

“This is natural. As there is shortfall of electricity in the urban areas because of load shedding, the demand of solar energy will definitely pick up,” said Executive Director Professor Dr. Govinda Pokharel. “ The recent decision of the government to provide subsidy in installing solar energy will encourage more people to switch to solar mode.”

At a time when the supply of electricity from the central grid is declining with the increase in load shedding, more and more people are depending on imported petroleum products. Fuel imports have seen a constant upswing.

Nepal’s oil imports amounted to more than NPR 150 billion in the year 2011/12, a 35 percent jump from that of the year 2010/11. According to Nepal Rastra Bank (NRB), petroleum products make the country’s largest bulk import, with annual spending equivalent to 21 percent of the national budget. As the demands for fossil fuel continues to grow sending the price much higher recently, the solar option is the emerging trend.

“Given the present policy of the government, there will be massive increase in the demand for solar power,” said Dr. Pokharel. "As the solar technology has seen drastic improvement in the recent years, it will substitute other energy sources.”

Solar energy is also used to recharge electric vehicles, running the water pump sets and street lamps. After bio-gas, solar is the next popular alternative energy source in Nepal. The demand of wind mill is also growing, but it is yet to take up.

With the affordable solar energy system, people are moving into solar options with the capacity of running television, charging laptop and four to five lamps for up to four hours. “After installation of solar system in home, I don’t care whether there is electricity or not,” said CA member and leader of CPN-ML CP Mainali, who came to see the renewable energy week with some of his party members.

The message of the Renewable Energy Week is crystal clear. People of all walks of life have found in solar energy a way out of the long hours of power cuts. If the government continues to encourage this trend by announcing new policies, the people will switch to solar system from the current hydro-power use.

Energy That Transforms By Keshab Poudel 2 days, 11 hours ago

Five Years After Promulgation Of Seventh Constitution By A Correspondent 3 days, 21 hours ago