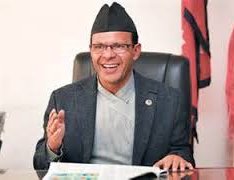 Just a day before making the Common Minimum Program and policies of the new government, Nepal Oil Corporation increased the prices of petroleum products to reduce the burden of losses it was incurring.

Although this is a very unpopular decision among the middle class urban dwellers, who feed on the subsidy given to Nepal Oil Corporation, this is the first right and bold decision of the present government intended to bring the economy back on track.

Nepal’s economic growth has just remained around 3 to 4 percent in the last few years and the capital expenditure has suffered heavily due to irregularity in introducing the annual full budgets. The new government has announced it will formulate a budget management and fiscal accountability law  in its bid to bring the fiscal budget in time and improve its implementation.

“The government will fix a new schedule for budget announcement so that there will be enough time to implement the budget and fiscal programs,” said Minister for Information and Communications Dr. Minendra Rijal, unveiling the government´s Common Minimum Program.  The coalition government led by Nepali Congress (NC) has also said the new law would shield political influence from budget formulation and implementation process.

“The new law would make timely introduction of budget and implementation of budgetary programs legally binding,” said Baikuntha Aryal, joint secretary at the Ministry of Finance.

Experts argue that this move would end uncertainty over budgetary programs. “The government should endorse the proposed law from parliament at the earliest. We have seen only a few full-fledged budgets after 1990s,” said professor and Dr. Bishwambher Pyakuryal. “The trend of issuing partial budget has affected the national economy badly. “

Though the government introduced full budget for this fiscal year, there has been low progress in capital expenditure. Only 23 percent of budget set aside for development works has been invested so far.

Likewise, the government has also announced instituting a separate ´infrastructure development fund´ in which the unspent budget of big priority projects of road, irrigation and hydropower would be diverted at the end of fiscal year. The government will release additional budget for big projects from the fund.

The government has also vowed to bring a number of laws, including amendment to Industrial Enterprise Act, and Special Economic Zone Act, among others, for industrial development and investment promotion.

The CMP was published a week after the publication of Economic Outlook by the Asian Development Bank. According to the outlook, Nepal’s economy has gained certain momentum. “The positive political outlook, expected increase in agriculture production following favorable monsoon, modest improvement in capital expenditure following the timely full FY2014 budget, and a strong services sector performance supported by remittance income are expected to boost gross domestic product (GDP) growth (at basic prices) to 4.5% in FY2014, up from 3.6% in FY2013,” the report revealed.

The report said the forecast is lower than the government’s 5.5% target in view of the less than expected increase in capital spending and a slightly lower services sector. In addition to the improvements in agriculture production, both domestic and foreign investment commitments increased remarkably in the first half of FY2014.

The report also pointed out the bleak side of the budget. “Despite the timely full budget, expenditure performance was not satisfactory in the first half of FY2014. Of the total planned expenditure of NRs517.2 billion, only 30.3% was spent largely due to the lower than expected capital spending. The slow pace of spending so far indicates that the capital budget is likely to continue to be under-spent as in the previous years. If the utilization of the capital budget remains at the same level as in FY2013 (81% of total planned capital expenditure), the total capital spending in FY2014 is projected to be about 3.5% of GDP, lower than the 4.4% of GDP projected in the budget but slightly higher than 3.1% of GDP in FY2013.

“There is an urgent need to ramp up both the quantum and quality of capital spending as it not only ‘crowds in’ private investments, but also helps create the foundations for the lackluster growth to take off on an employment-centric, high, inclusive and sustainable growth path,” suggests the report.

Inflation averaged 9.1% in the first half of FY2014, down from 10.7% in the corresponding period in FY2013. Inflation moderated in all the six months of FY2014 compared to their corresponding months in FY2013.  Similarly, the report also pointed out the progress in BoP due to the remittances and increased foreign currency reserves.

As there are still four more months to go before the new budget, the government can still take steps to bring Nepal’s economy back on track.

BEEN Energy Efficient Building By A Correspondent 4 days, 5 hours ago