Committed to promulgating the new constitution in a year, major political parties, however, appear to have lost their way as they struggle to agree on the proposed Constituent Assembly Rules 2014 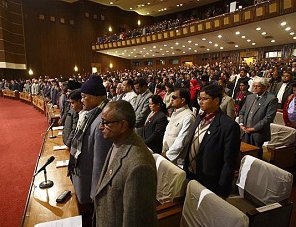 Even if it is endorsed, there is no way the Constituent Assembly Committee will easily settle the disputes. The number of CA committees has been reduced to five unlike in the past CA. This means every committee will have 120 members sorting things through. In these circumstances, it may take a long time to settle the issues.

One of the positive sides of this development is that major parties in the Constituent Assembly (CA) are preparing to form a powerful cross-party committee to guide the constitution-writing process and hold talks with disgruntled political forces outside of the Assembly.

Leaders say the committee will be one of five proposed in the rules of procedures. The committee is likely to be given the responsibility to resolve the contentious constitutional issues, including federalism. All parties have, in principle, agreed to its formation, though some fringe parties are lobbying for their inclusion. The committee will have 81 members and its coordinator will be chosen through consensus.

The committee will organize meetings, seminars and other conferences with stakeholders to solicit views on contentious issues. The committee shall have the right to give directions to the government and other committees of the CA to implement past agreements and include them in the new constitution.

The draft regulation has proposed removing the bills committee and to entrust all thematic committees with discussing and recommending amendments to the bills of related ministries.

However, the draft has reduced the number of committees in the CA drastically. It has proposed altogether five committees while there were a total of 14 committees, including 11 thematic panels, in the previous CA.

The draft has also proposed another new provision. There will be a question hour in parliament whereas there was no such arrangement in the previous legislature. There was a special hour and zero hour in parliament.

“We proposed the new provision to make ministers more specific in his/her answers to the lawmakers on particular issues during the question hour,” said CA member Ramesh Lekhak. "If a lawmaker puts a query on the progress on the construction of a bridge, a road section or a school, for instance, the concerned minister must give the latest details during the question hour.”

Although the CA is finalizing its own Rules and Procedures, there are many things to happen before the promulgation of the new constitution.